Hang On: A Second Wind by Eshwarmurthy G Pillai is a very relevant and timely novel for the debt-ridden farmers of Maharashtra, who often thought of committing suicide to get rid of their problems. The novel is staged against the dry region of Maharashtra which receives unpredictable rainfall that causes worry for the farmers. As farmers of that region commits highest number of suicides every year due to bad dept from loans and pervading poverty. This novel concerns the voice of millions of farmers across that region through the lead character Subodh Kadale. 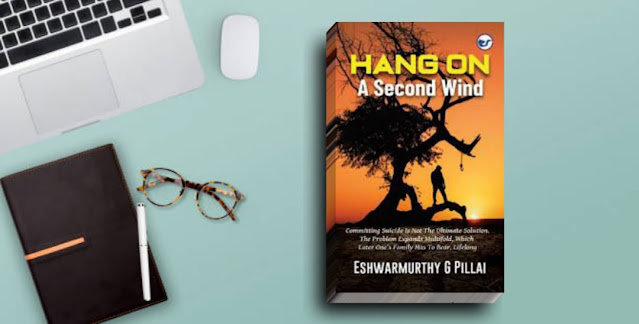 Like many other farmers who are poor and unable to pay the loan taken from banks, Subodh Kadale too loses his house to bank and as a last resort thinks of committing suicide. As he approaches for that final step on a railway track, he is accosted by a small school girl named Vanhi. She calls him Aaba – which roughly means father. He is taken aback and listens to her story as how her father committed suicide on the railway track and how she and her mother are paying the price of that sin.

His meeting with that small girl not only opens his eyes but also inspires him to do something great for himself and other weak and poor farmers of that region. As a result, Subodh Kadale takes a job in bank and later on builds a lake in the hills to harvest the rainwater. The novel perfectly portrays the plight of a trapped farmer. The author brilliantly captured the family pressure and standard of life caught in financial constraint.

As the story progresses, a few more auxiliary characters join hands with Subodh to achieve his dream of helping other farmers. However, things are not as easy as they look. Subodh Kadale has to arrange for equipment and finance and most importantly the support of other farmers and locals. The road for his success is full of thorns. It is only his mettle that can pull him out from that.

The novel holds a simple story of a struggling farmer. Undoubtedly, its message to the world is strong. The book delves into the issues of farmers and put emphasis on solutions rather than committing suicide. The book is easy to read and keep track of events and characters. Lucid narration with no editing flaws, the novel is worth a try.