The Blissful Inferno by Abhishek Pathak is an action and adventure novel set in hell, where the lead protagonist Kushagra finds himself entangled among some bigger and darker demons. This novel is a fine blend of little mystery, some fantasy, and absolute thrill. This is one of the first novels that I came across in my life which is back staged against Hell. 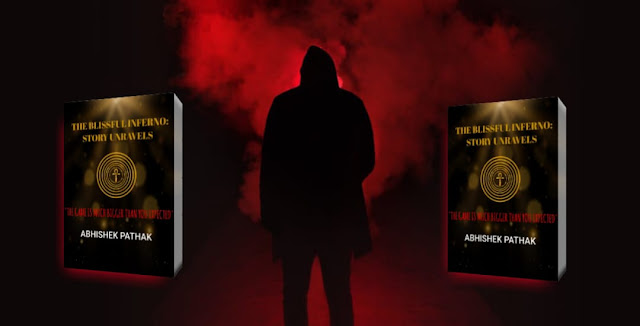 The word Hell itself is a dread to think of for humans. Well, this novel takes a leap of imagination and presents a truly incredible and light and funny-tone story of one normal guy who reaches hell only to find himself entangled between demons that rule the hell. The main character in the novel is Kushagra. On earth, he was married but not happy with his wife as she was in love with her ex-boyfriend Abhishek. Kushagra knows everything but at the same time expects his wife Keerti to be faithful toward him…things did not work. He gets tensed…his car falls in the river. He is missing…but he is here in the hell.

Before he could reach anywhere, he is stranded on the earth, struggling to make sense of things. The novel changes drastically once he is in the realms of the hell. Readers may begin loving the subplots and the turn of events in the hell. The hell that is portrayed in the novel is different and somehow a cool place until one is confronted by demons like Azazel and his brother.

Stretching over 200 pages, the novel is entirely unique and fresh with its concept. There is so much thrill and adventure and suspense in the hell that one cannot simply anticipate or imagine. Can you imagine – hell is also divided and there too demons fight for superpower. Will the lead find any ways to get back to the earth or he has to choose any side to live peacefully in the hell? Can hell be a peaceful place too? If yes, then at what cost. There could be many how and when sort of question can arise while reading this book – but it is all wroth the time and money.

No one may believe that this is Abhishek Pathak’s debut novel with such vivid imagination on a dark topic like life after death. This book has light-hearted tone and engages the readers with timely secrets and mirth that takes place between in the hell. A good novel with a different story! It is easy to read and enjoy…one must read it at its own pace to consume the full pleasure.