Book Review: The Sound of Boots by Merena Toppo and Mansi Sharma

The Sound of Boots is a general fiction novel written by two authors: Merena Toppo and Mansi Sharma. Stretching over 100 pages, the novel explores themes like guilt, redemption, father-son bonding, adverse time of Covid, and reflections of old days, betrayal in friendship, and a few more. 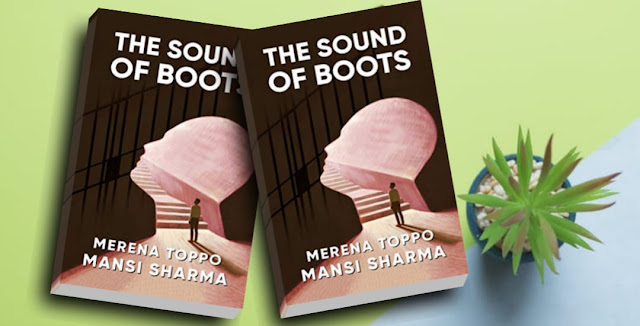 The novel is set in the present time of Dehradun, but it visits Delhi through memory lane.  The story opens with Sanjay and his father Dilip sharing the same house in an unconventional and uncomfortable way. Initially, the authors build air about these two characters. Much has been changed since the untimely death of Madhu – Dilip's wife. The authors brilliantly captured the melancholia and gloominess that pervades when a close one from the family passes away.

Sanjay is their son who lived and worked in Mumbai. After the death of Madhu, he became a kind of aloof and has had very less communication with his father Dilip. However, during Covid pandemic things changed. Sanjay comes back to Dehradun and then a sort of rebounding takes place between both.

The novel is divided into two aspects: current storyline, and past life of Sanjeev through letters. So the story shuttles between present guilt and past redemption. As Sanjay gets hold of old hidden letters from an old box, the second story begins in the novel. The letters are from Sanjeev – Dilip’s only friend. They were friends since childhood and attended the same school and for a longer time also held a dream of living and working together…but the quirk of fate had something different in store for them. One settles with a government job, while the other lands up in prison.

Sanjeev writes letters from prison to Dilip. Is he asking for help? Will Dilip go ahead and help his friend to come out of the prison? Sanjeev’s story clung to one persistent thought: “All that a man has is hope, everything else is just ramification of it.”

Is he hoping for the right thing? Does hope work in life when someone is forced in the black labyrinth of prison – left unattended and broken?

As the story looks gelling up post midway, readers will be curious to know the fate of Sanjeev and what Dilip did to salvage his friend from the prison. In Sanjeev’s part, the authors presented the filthy grim reality of prison life. It may embarrass the readers…but a well-captured reality. People in prison are rotting as they are in hell. It is one of the humanitarian messages that the book tries to relay to mass.

Overall, the novel has contemporary tone and written in easy to grasp language. Since there are two narratives, it is likely that people may sympathize with Sanjeev’s story more over anything else. It is a good one-time read. The storyline is very straight, it doesn’t confuse readers, but at the same time it fails to create an element of thrill and suspense, especially when one of the characters is suffering in the prison.