Book Review: Rage of the Immortals by Kanika

Rage of the Immortals by Kanika is a fantasy novel set in some other world. The novel stretches over 300 pages, with short 49 chapters. Because of the short chapters, the novel exquisitely moves at a fast pace, otherwise in fantasy novels readers have to stick to characters and their out-of-the-world peculiarities to completely settle down. After initial chapters, the novel is packed with action, adventure, suspense and thriller, melancholia, and many other queer aspects. In short, for hardcore fantasy readers and those who prefer sci-fi Hollywood movies, it’s a treat. 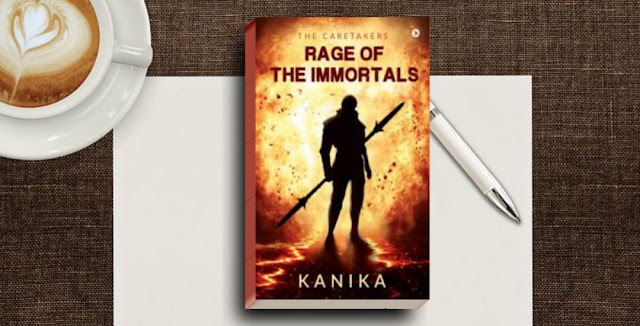 The novel opens with Lt. Sefina aka Kara, a Navy officer from New Nyssa, being found in ‘Underworld’ in the custody of Cifer. Much part of the novel drifts around these two characters, trying to understand each other’s personal space and other idiosyncrasies. They both are different. One being a human, and the other as demon with special magical qualities.

Kara lands up being a ‘slave-type’ bodyguard for Cifer for lifetime. On the other hand, Kara has some personal problems with her family and the fiancée Moss at New Nyssa. If Cifer releases her from the contract, she has to marry Moss. As the novel chugs ahead, the author introduces other characters and different backdrop and secrets.

Moss and Cifer are bitter enemy to each other –and between them Kara is caught to take a harsh decision. Cifer and his team is a sort of caretaker of the Underworld; however, Moss wants to conquer it. The storyline is brimming with vivid imagination of different worlds, magical powers, demons, and so on.

Despite a large cast of characters of mixed species, there is a sense of inherent human feelings and aspirations. Author Kanika has used simple and lucid language which fosters the overall readability of the novel.  The book seems mix of sci-fi and adventurous fantasy set in some other world in the galaxy. The author has given hints about the backdrop of the storyline as early as the novel starts. These type of fantasy movies or books are built around wars – if one remembers Riddick Series – can relate exactly.

Another unique aspect of the novel is discussion and involvement of gods. The book proposes a world beyond one god. Interference of gods nudges the plot to an extent of unputdownable thrill. Kanika leveraged the power of superb sense of imagination to chisel the characters.

Broadly putting the story is about war between the Underworld and New Nyssa worlds. Moss wants to rule over the Underworld where souls rest but he has to surmount formidable team of Cifer with Kara at their side. Well-written and perfectly composed, Rage of Immortals is a high-level fantasy novel which can be enjoyed by naïve to veteran sort of readers. A highly recommended novel!