Handcuffed to Love by Yuktha Asrani is a fast-paced and entrancing romance novel. It is a contemporary romance but, at the same time, also sheds light on social barriers when it comes to marriage. The world may look smooth and connected but when two lovers are up for marriage, problems begin pouring in. 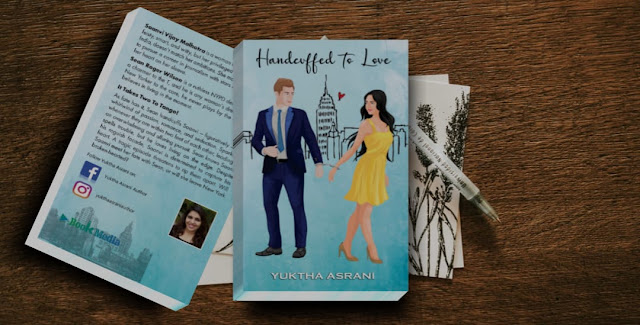 The novel features Saanvi Malhotra from Delhi and Sean Wilson from New York. The story takes a riveting momentum when Saanvi lands up in New York for her internship in journalism  but little did she know that her life is going to be changed forever as soon as she acquaints with a NYPD detective.

Saanvi has a group of friends in New York and through them she stumbles upon Sean Roger Wilson, who is working as a NYPD detective. Other than Saanvi and Sean, there are a few more love affairs. The book is not solely based on two people’s love saga, rather in between a lot of family melancholy and action keeps us glued in the story. Sean is chasing a serial killer named Joe Douglas, a deadly rapist who has killed over eighteen girls for his lust.

The author has done a wonderful job by keeping the story shuttling between two worlds. Saanvi is different and Indian, on the other side Sean is a typical American, playing with dangers in his detective job. The contrast between both is remarkable but it is the same element that forms riveting love chemistry in the story. So the question arises–is their love story feasible or it’s going to be another romantic cul-de-sac?

Yuktha Asrani has weaved a brilliant love story by enrolling two opposite characters. From grooming to religion and nationality, they both are different. But can love blend them? The author has kept the narration and language usage simple and lucid. From naïve to veteran romance readers, all can pick up this book anytime. It cannot be denied that the charm of the book is its indigenous New York backdrop. Overall, a lovely book in the romance genre by an Indian author!