I am fond of simple and light children’s literature. I often read Ruskin Bond and Sudha Murty and also tried Caravan to Tibet by Deepa Agarwal. Well, the quest to find more authors in the children’s literature genre is insatiable. I read fiction where children play the major roles, change the climax, and put readers back to their time. 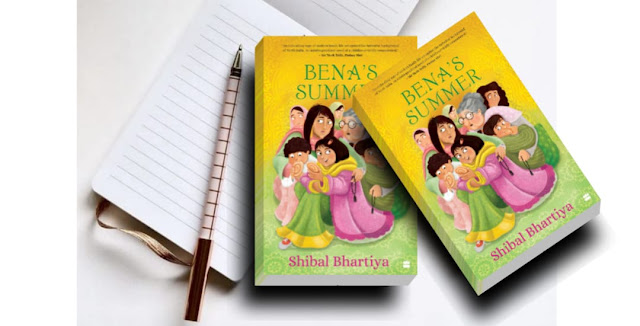 So this time I have ‘Bena’s Summer.’ As the title suggested, a novel built around a kid, I picked up without much hesitation. It is a fascinating account of an eight-year-old Muslim girl named Benazir (in short Bena) at two places, first in Gaya in Bihar, and second at Sultanpur in the eastern UP. The story is about one summer which didn’t go as usual like the previous ones. The author has staged the story back in time when mobile phones and modern ways of telecommunication were not available. Bena has a good family. The family cares for her, loves her, protects her – in fact nothing is missing in her life. There are other children, women, old men in the house, and servants, etc.

The novel highlights the sundry of issues and concerns that women may face in family and domestic life. The first half of the book is like introducing characters one after another and a lot of gossiping. But the author beautifully painted feelings of love and care and protection that go in a family, other than the façade of gossiping and brouhaha.

The novel captures the ambience and its allied psychic where a child possibly learns a lot while growing up. The story turns intense and grows fast-paced when Bena and her family are at her maternal grandparents in the eastern Uttar Pradesh. To her company there is Hafizji, Kundan, Khala, and many more. There is dilly-dallying, glorification, fun and mirth…but after some time communal disharmony knocks at their doors to test the allegiance of the family. A few blocks from their home, communal riots try to change the destiny of many. Will Bena have a pleasant summer? Or will she go away with some unforgettable pain for lifetime? This matters for a child.

Shibal subtly portrays how a family and society and its environment can change a child’s malleable heart. It is a good story with underlying motives. At times sentences are long-winded and chores sounded repetitive – I personally felt that the novel could have been covered in around 200 pages – 250 + was redundant. Bena’s Summer makes up for a heartfelt read, but I don’t think that it is entirely a children’s fiction, well growing children and their parents can pick it up. The tone of the novel remained humorous despite the communal tension building up and down.