Book Review: The Law of Capture by Joe Totten 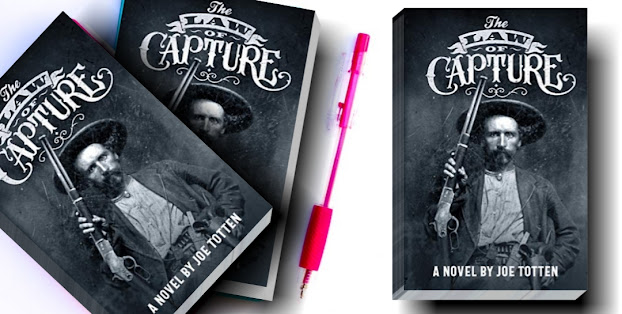 I have read many novels based on Western America, all promise sanguinary adventure and heroic deeds of a common man in the lap of nature. This one, too, was good. I hoped for a full-fledged story of one person with some substantial motto in life; however, in the story one man keeps changing his name and he is not a hero. He wore many hats in his life, such as outlaw, war fighter, cattle herder, rancher, Sherriff, detective, and above all an independent man. He didn’t care much of etiquette or sins that a man ought not to commit. Whatever he did with fewer protocols, he did to fit best in the game of world’s survival.

Often stories from Western, like Wanted Dead or Alive, The Big Sky and so on give outsiders like us a different picture of the USA. The earlier shades of civilization were not grey but black. Even in this book, the guy Corky Vance, found himself a misfit in the settling civilization. He wanted to be a man of law but fearless and forthright. However, his time – the book is divided into two parts – first as late nineteenth century – and secondly in the early twentieth century of motor cars and enigmatic trains.

Coming back in the story, Corky Vance when returned from a war longed for a life that is adventurous and far from the silent comforts of home. He tried to be a good man. Worked in a ranch but when the owner refused to pay, he beats the man to his death. That was all. He first starts making money by rounding astray cattle from one province to another with some other men. The only lurking danger is Indian tribes…different ones at different point of time.

Western novels are incomplete without that rustic touch of Indian tribes and tussle of white man with them. This book is poignant in reviving the early days of American civilization before it was kissed by industrial revolution and capitalism.

The main character in the story is Edward Valentine, with name changed. The book is full of stories of adventure and killing and nomadic ways of life of men. Also, it highlighted the difference between white people and the tribes. In most of the cases when Edward takes the role of Sherriff or as a hired assassin or detective, he finds Comanche or Osage as main culprits over others. Going by characters like Stares at the Sky, Shaw, Pine, there comes a complete sense of lawlessness. Could America be that land of total chaos and no law? Better you pick up this debut novel by Joe Totten.

There is wisdom, quotes, thoughts, and bit redemption. Well, in the case of action and adventure, leaving a few initial chapters, the book gains a sort of cliched pace. Same set of planning and encounters and killing and that gun protocol. I would have loved it more if the main character had a specific aim to follow than just killing people under various tags.

The overall narration is sprinkled with humour and the book could have been greater had it been less than 200 pages.