May 15, 2020
Arya Dharma is a work of non-fiction by Bollachettira Dhyan Appachu, the book runs over 600 pages. It tries to settle down the dust on one of the most pressing issues the world facing nowadays – conflict of interests due to different religions. The whole world is prejudiced and fighting to prove their mastery and superiority with respect to their religions. The author Dhyan takes a sneak into the matter and comes up with a presumably solution – Arya Dharma. 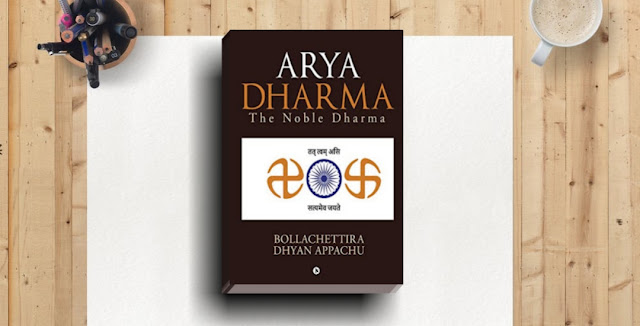 This book is all about Arya Dharma: what does it signify, where does it belong, and what sort of prosperity it can bring to the world. But in the process, the author seemed like vented his anger towards the Western society, he invented something like FUKUS – it means inclusion of France, United Kingdom, and the USA. FUKUS is the full form of these three countries. Based on his experience and research, he is of the opinion that today world is declining, the moral values, compassion, humanity and all due to FUKUS system. In this system, people care for wealth and self-interest over anything, which is the root cause of all ill-feelings that is growing among all of us.

It saddens to see that our country Bharat (currently named as India) has been groping and going astray due to the FUKUS system, however, earlier during the time of Ram Rajya or Magadha – it wasn’t the case. With time everything changes, but Bharat changed for no good reasons. The book holds higher level of philosophy on the stratum of religion and nation building. The author has given, from time and again, examples from Vedas, civilizations, Sanskrit literature, included links to movies, articles, and libraries. The book is like a journal cum research work. Its intensity is high and it sounds well-researched. If it’s understood properly, the book’s teachings and contents can be used as insightful lessons for the generations.

Let’s take a look into the themes of the book, Arya was not a race, it meant noble, so Bharat was following Arya Dharma which collectively meant Noble Dharma. Yes, the point to understand is that Arya religion is based on nobility and compassion than rituals and noises. To explain it better, the author condemns the concept of my land, one nation, one land, our land kind of theories, rather he prophesizes Under Heaven, which he gets from Chinese culture, namely Tianxia.

The whole world is one family, according to one Sanskrit Sholaka. The concept of Arya/Noble Dharma is heading towards the same way. After explaining the history of religions and conflicts and FUKUS system; he takes us to the ways as in how can Bharata once again prosper the way it did during the Ram Rajya. In the wake of the same, the book chugs ahead and throws optimum light on Law, State, Development, Administration, and some more in-detailed concepts. The author also rebounds the caste system and discusses ‘Manusmriti’ – but many may doubt this section as nowadays it makes up a sensitive issue.

How can India achieve great growth without getting into the clutches of FUKUS system is brilliantly penned down? Other than the main concept of Arya Dharma, the book is a fountain of knowledge and gives various links and hints of resources, the book is good for non-fiction readers and of course for those interested in cultural studies. Overall, written in simple and credible way, the book’s philosophy tries to convince all and appeals to have a world that is not only peaceful but also meaningful.
Also by the same author: The Art and Science of Real Wealth