March 10, 2020
Two Girls by Shivam Diwedi is a captivating romance novel with a healthy dose of adventure and action. As soon as the story kicks off, readers will be thrown into question as why Rudra is being taken to the police and being investigated for the disappearance of a girl named Shriya. That itself is interesting enough to nudge readers for a complete read. 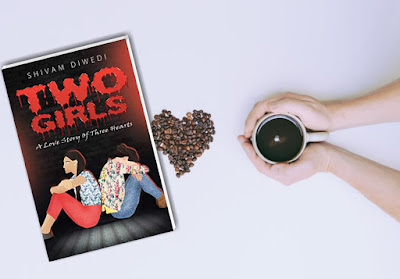 Most of the romance novels start with something soothing or in a usual way, well this one is a bit different. As the story chugs ahead, it doesn’t take much time to recognize that Rudra is that guy who is going to lead the story from start to end. Well, he does.

The author has used flashback and sweeps to make this novel as riveting as possible. Rudra’s character wasn’t developed inch by inch; rather he was shown someone as bold and dashing, of course with good looks. He is an orphan, lives in Kanpur, and works in McDonald's, where a ravishing girl Anika is his close friend. The most of the backdrop of the novel is about Lucknow and Kanpur, and later Goa for some time.

In an event at Lucknow, through his friend, he stumbles upon gorgeous Shriya. Despite based in two different cities, they develop feelings for each other. But can their casual flings lead to a happy ending? Interesting, right?

One of the best aspects about this novel is that the author has kept chapters quite short and before you begin shuddering for predictability or boredom, you will be reeling for more. On the forefront is the simple and casual love story of Shriya and Rudra. While Shriya is at college in Lucknow and Rudra at work in Kanpur. Their story wound up and down with time, but it begins looking like a thing of distant when Shriya have someone else, and on the other hand, Anika confronts her liking for Rudra. In between the two girls, lies Rudra’s struggle and fight for justice and love and much more. It’s exciting to see how a simple moving love story transforms into a fervent saga, especially with the entry of auxiliary characters like Manpreet, Abhishek, and Annu.

Soon Rudra finds himself racing against the time to save his love. Shriya’s characterization sounds like a privileged and Anika as a poor child. Why? A lot of women psychology and traits have been brought forward along with some hot bedding romance.

This is one love story where prediction not only becomes tough, but also as a reader you will be directionless, it is so full of twists and turns. The inclusion of two girls and one guy makes it a bewitching read. Romance lovers looking to read something fast and sizzling can definitely pick up. Shivam is a debut romance author and it’s nice to note that he managed to put a lot of intensity and charm in the novel. It could be based on true love stories, but as a book it stands out tall in today’s times. Overall, great writing with good narration skills, Shivam is here to stay for longer than you think.