March 31, 2020
At times a few novels come that take you away with its flow. You just want to be with it, no matter how engrossed or lively you are with characters or the story. There’s something charming about the backdrop and flow of the events or some idiosyncrasies of lead characters. ‘Ripples of Eternal Love’ by Pravin Pandey is one such book. By its semblance, it looks like a story of a boy who experiences a lot around the river of his village. However, in its core essence the novel is purely riverine with the river Swarnrekha as one of the silent protagonists.

“I was reminded of the name of this river that keeps rolling endlessly – Swarnrekha. I turned to look at the golden stretch of water through the corner of my eyes and realized how perfect the name was!”

“Swarnrekha literally stands for ‘streak of gold’. When I looked at the river, it was dazzling in all its glory.” 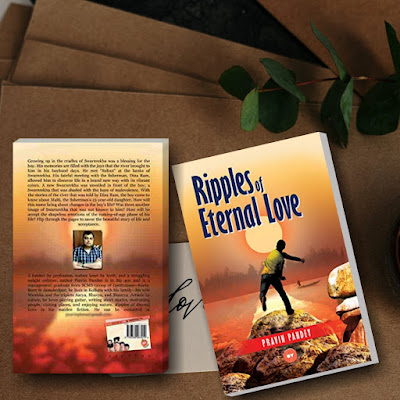 The story features a teenage boy, he is silent (probably nameless), and lives in a village with his family. Somewhat he is alone and shy and introvert. To suit his mood, riverside is the best hangout place for him. But there he witnesses a giant rock named Sultan; rumours have that this rock never gets submerged in the water.

Like carefree days of childhood, the boy sits there to observe the fishermen, women washing clothes, and to while away the time, he indulges himself into stone skimming. The boy considerably spends much part of the day there alone and after one point of time begins thinking that he has understood the river completely. Well, soon he gets to meet Dina Ram, an old fisherman, who not only changes his perception about the river but also begins influencing his life.

The river Swarnrekha possess like an enigma to the boy. He begins getting more information in the form of stories and folklores from the fishermen, his beliefs around the rivers begin changing and ossifying. Keeping aside every other thing, he sees a hope of contentment in Dina Ram. In fact, Dina Ram is a brilliant folk singer, whenever he is at the riverside or in the river, he sings and the boy gets attracted and wants to learn the music from him.

They both get along – kind of friends. As Dina Ram’s life story unfolds inch by inch, the boy gets to know that he has a daughter, Malti, his age, she is brilliant and talented. He listens about her more from Dina Ram. As the time passes, the boy begins teaching Dina Ram English lessons so that the latter can see the progress of his daughter. The tone of the novel and flow becomes quite internal whenever the topic of Malti surfaces. Unable to bear anymore, the boy struggles hard to meet Malti, but every time some or other thing puts hurdles in between. Why he is restless about Malti and wants to meet her? Seems like an interesting story within?

The narration of the river and around and the people and their culture is truly impeccable. The boy holds an inexplicable love and attachment to the river, so do Dina Ram and his daughter. One day the boy hears a story about a man who tried defying the malevolence of the river… river gives it back, whatever it takes…

This saying isn’t just a belief – rather a strong protocol of the river and the boy probably wants to satisfy his inherent doubts.

One day the news of approaching storm vacant the entire village, except the boy and some. In the aftermath of heavy rains and the storm, Dina Ram and his daughter are nowhere to be seen. The boy’s heart palpitates with trepidation. He sets himself out in quest of them…will he be able to locate them or something untoward will put him off forever?

The novel has smooth narration and with changing time and climax, it changes its tone and shades quite subtly. Just think about the story…you would feel it going like a saga…there is a lot that one can gain from this book. Concurrent themes in the story are loss and acceptance and innocence. And for sure, the fate of the book demands a sequel – the character of Malti is intriguing and she needs another book to showcase her brilliance and temerity.