March 10, 2020
Mirrro the Weird Wayward is a terrific novel, with part fantasy and part dystopian themes. Since the novel has been entirely built on a unique plot, even its title is a bit queer to pronounce and spell. Anyway, the messages it carries for our societies are tremendously valuable and if the solutions given in the novel happened to be materialized anytime, anywhere; well then many incorrigible sins that exist in our social stratum can be wiped off easily. 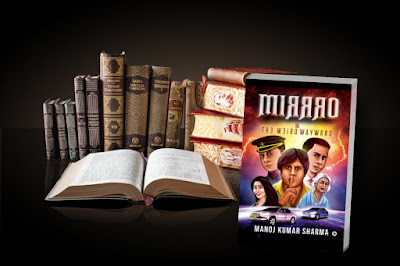 The novel is 372 pages and the story runs inside is of a few characters, though intricately connected, spans through a long time span. The lead character of the novel is Indo, but he doesn’t make an immediate entry. The novel starts with 2030, the year has just started, people might have been under the hangover of the previous evening’s New Year party, and then the fun begins. The news of massive fire breakouts at different locations across the country on the same day indicates some kind of attack or business gamble. But it’s something else. The fire breaks out were at major liquor and tobacco manufacturing units. The fire was set up so enigmatically that from owners to investigators all go haywire. All was shocked, including the readers, as why fire devastation only at places that have big units of social poison.

As readers were thrown into loop, TV debates follow one after another, and through the same we get to know Indo. Initially, he sounded like a simple man with ardent thought process. But as later on his own life’s story unfolds, things begin to scramble up as why he was like that.

The next phase of the novel covers Indo from a very early phase, and it ossifies there and then that he is the protagonist amid all the gamut of hosts on TV debates. Indo was a simple child trying to overcome his share of grieves after being orphaned at an early age. The only trusted one he has was his grandmother ‘India’, living in Dehradun. She tries to handle and mentor him. But he is a bit obstinate, further his insistence of taking admission into a good medical college in Delhi ruins his aspirations and gives him the harsh side of the society. And here onwards, life is never the same for him. How and why? The rest of the narration will take you there.

The novel is beautifully yet subtly divided into phases, though the number of chapters in it is less. With each phase it advances and new things come up, especially when Indo’s life unfolds as an armed medical officer in Pune and Mumbai. He was a lover of life, but time and society is ruthless to his ambitions. At times, Indo being upset about not able to shape his career or life as per his anticipation leads him to gloominess and pessimism. But the catch is why Indo indulges himself into addiction of liquor and smoking. The reason dates back to his college days…something terrible had happened then that it still haunts him. His stay at the medical college in Delhi is sure to make anyone uncomfortable, but still he tried to give a strong fight. The book has many angles, one is drug addiction.

Talking about love and relationship phase, Indo never liked a girl for marriage. He was ageing, but something stopped him from getting married. It was his quest for soul mate. And one day he saves a girl named Maasma from bloody rapists in Mumbai. A love story begins sizzling. From casual flings to marriage, they reach that point but something terrible awaits them. What was that? Maasma is being snatched from him. She was gang-raped. Indo tries for justice a lot but fails in his own limits – he too suffers.

At this side, only his grandma stands. She teaches him something about paranormal identity and it was Indo’s determination to avenge that leads him to that point. Was he able to achieve something extraordinary and yet weird…via a secret that hardly exists for anyone in this world. Even if he achieves that…how and what he will do with his powers? Will he be able to eradicate all social crimes from the nation? Can he rise above all to become as great and humble as superheroes like Superman or Spiderman? Read on to know his fate and actions? Indo is never the same the guy for sure!

This novel holds a bold stance for social crimes that disturb the progress of a nation. The author must have done a tremendous research to come up with a concept like Mirrro, yeah a bit weird but powerful in its own essence. The novel’s solutions seem like need of the hour for any nation that has no control over crimes. Overall, it is a fascinating read, any day, and readers will be excited to know more about that paranormal identity and future of Indo and Maasma. Probably, the author may come up with a promising sequel.