Author Highlight: Dipnanda Bhaduri Roy Discusses her New Novel ‘I am in Love with a Shudh Desi Firangi’ and Stories from her Life

February 29, 2020
We are delighted to welcome a very promising novelist Dipnanda Bhaduri Roy for a brief Q & A session at our website about her recent novel ‘I am in Love with a Shudh Desi Firangi: Hey Shiva, I See You in Him’.

In this Q & A session, she will be talking about her writing aspirations, inclination towards contemporary romance fiction, and the route to getting her novel published. Stay on...while we chat with her. 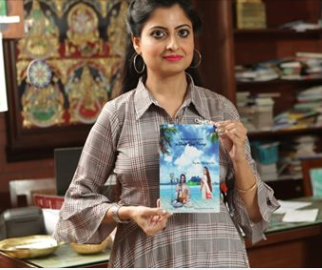 Would you mind telling a bit about your novel – maybe in two or three sentences?

Blending and Acceptance: Loving interactions between Hinduism and Christianity, which redefine selfless love towards Lord Shiva and humanity. If you truly love your God, you can find Him in any religious or cultural setting. You would end up seeing Him and feeling His presence everywhere.

What inspired you to write this novel? Any tales...

I have grown up watching my grandparents worshiping Lord Shiva. There was a strong ‘Shiva-culture’ in my family. I was told that in every Jeeva, there’s Lord Shiva. I was told that Lord Shiva had the virtues of an ideal husband. His ‘simple living-high-thinking’ lifestyle and His ability to denounce wealth and the worldly pleasures of life fascinated me. I felt that He believed in gender equality and empowered His wife to successfully fulfill her responsibilities of protecting the creation from evil forces of destruction. So, I was looking to write a story with a hero who will have a strong presence of Lord Shiva in him. I was looking to create a sort of a modern-day Shiva-Parvati romance and what resulted was “I am in love with a Shuddh Desi Firangi: Hey Shiva, I see You in Him”.

Do you think that society is the major obstacle in love stories?

I don’t think so. If that would be the case, then Arundhati Roy’s “The God of Small Things” wouldn’t have been a blockbuster hit. In fact, the society loves reading love stories provided they have adequate substance in them and they are able to invoke deep feelings in people’s minds. Classy love stories mean much more than just a treat for the pituitary gland.

Did you do any research for the novel?

The novel is set in two backdrops- Kolkata and Goa. I am born and brought up in Kolkata, so I am already attached to the roots of the Bengali culture. I have visited Goa once and have closely followed its diversified Indo-western culture, including its hippie culture. One of the major chapters in the book is featured in a place called Arambol, which is noted for being an abode for the hippies who have embraced the ‘Shiva’ philosophy. This region features a sweet water lake near the beach and is noted as a hub for Indo-western fusion music. I did some research on this place to portray the spirit of the place in a more realistic manner. Additional research on Shiva was not required- the existing Shiva-culture in my home and Devdutt Pattnayak’s shows helped me to craft my own depiction of Shiva.

What was your biggest learning experience throughout the publishing process?

I learnt that writing is not just talent. Writing is a business. Publishers are venture capitalists and they would invest in a new author only if they know that they have deep pockets to invest in promotions. Else, they have to be famous or infamous personalities who people would like to know about. This includes C-grade celebs or star-kids. New authors would remain Indie authors and would struggle to sell even 500 copies in a year if they have not set a budget aside for promotions. Else, they need to be born with a ‘rags to riches’ luck, which of course is meant for a few ‘chosen’ ones. Bestsellers are not born; they are made.

How do you handle the response of this book, especially from your friends and relatives and readers?

Friends and relatives would definitely appreciate your work because they have a preconceived notion about you. But when someone who you’ve never met comments positively on your work, you get the real reward for staying awake till 2 or 3 am for months to complete your manuscript. There have been missed reactions about the book cover- some have found it to be interesting while some have recommended improvisation. However, all have commented positively on my simplistic writing style and the eloquence. These feedbacks are driving me to complete my next work sooner.

Who is your favourite character from the novel – why?

While I love all my characters, the character that I believe is the lifeblood of this novel is “Rudra” (Rodney Stevenson). I have created him as an embodiment of Shiva and is a driver of obsession for the protagonist and the readers alike.

What are you working on next?

I am working on my second novel that would compel readers to re-think and redefine relationships in their own terms and in accordance with the definition of truth and justice, which they have in their minds. This is a romance, but it has twists and turns that would provoke readers to derive manifold conclusions about what a perfect ending should be. The backdrop of my third novel is set in the scenic coffee plantations of Coorg and it would be a tale of love amidst deprivation and exploitation.
The stories of the next five novels are already there in my minds and they would soon become soft copies in the next 2-3 years.