Book Review: University on Watch (Crisis in the Academy) by J Peters

January 20, 2020
I am familiar with J Peters, I had read his first novel (probably first in the school/college series) Small Fingernails. That novel was more on teenage madness along with a love story and mental health instability. It was good – how he chased Dorothea and broke with her was a little embarrassing and uncomfortable for me. But overall, I enjoyed the author’s conviction and honesty in narration. 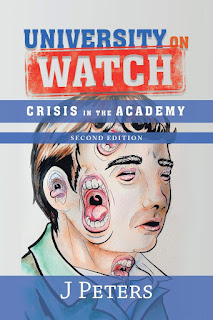 His second novel University on Watch, presumably a sequel to Small Fingernails is a terrific knock on the malleable hearts and adamant minds. The protagonist, written in biographical way, J Peters, this time posing as SUS struggles to get admission in English Graduate School at New London College. The only sad thing about the narration was author’s affinity for trouble in the form of drugs and suicidal attempts. This frustrates many close to him, including his parents; subsequently, he grows barren and secluded. But still, his will to overcome the mental health issues seem taking corners when he puts his life for contesting admission. I always thought America as a modern society, caring more for students having mental health issues. Well, this book shattered that perception. Be it any part, they are cornered and hardly anyone who could be with them when their mood swings for the dark.

Anyway, the lead character is high on will, madness, teenage rage, and crazy for getting inside the college. He gallops in and out the college, meets a gamut of in-charges and helpers, but most of the time, they try to label him unstable or invalid instead of help. That was frustrating for both – Peters and readers. Written in short chapters, it makes up literally a fast-paced book, more based on true events. If you read throughout, you will get to know his entire story, and to understand it completely without much sweeps and back stories, well then do read the first part first – Small Fingernails.

Say anything, I liked his gusto and fight to secure his position in the college society and campus. Though the events happened a decade ago, going through the book makes them surreal and as it happened just yesterday. The book has a powerful message for the people who think that it is best to ignore mentally suffering people to avoid commotion in the ambience, but they should remember that God doesn’t like that way. Today it could be any Peters, tomorrow your kids or you yourself. The title is apt! Short and engaging! Highly recommended! Loved it!


Character Sketch of Binya from The Blue Umbrella by Ruskin Bond
Binya is the main character of the novel ‘The Blue Umbrella’ by Ruskin Bond. Her full name is Binyadevi. As in the hills or anywhere in India it is a kind of trend to call children with their short nicknames. Binya’s elder brother’s name is Bijju, whereas his real name is Vijay.
Binya aged eleven is a hilly girl. She lives with her small family in the hills of Garhwal. Her father died when she was two years of age. For sustenance, they have three tiny t…
1 comment
Read more