Book Review: A Tryst with Mahakaal (The Ghost Who Never Died) by Tilak Dutta

January 05, 2020
A Tryst with Mahakaal by Tilak Dutta is a part thriller and part dystopian novel in its semblance. However, there are some other sub-themes as well that, at times, run deep in the backdrop and look overwhelming. The novel stands out for blending themes and characters and climaxes all into a heady mixture of fiction. By all standards, Tilak Dutta managed to pen down a riveting tale that will be taken seriously by hard core readers across the world. And for that there are reasons. Well, coming to the story, the initial chapters give hunch about Netaji Subhash Chandra Bose. We see Leela as one of the major characters, her grooming and later life has a lot to do with the freedom struggle of India and INA. In short, she holds an interesting and enigmatic ancestral history that has seen war and freedom first hand. 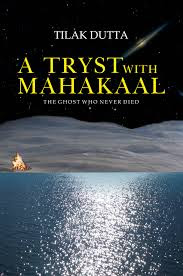 The main storyline picks up when Leela along with some other activists working in the favour of refugee crises in north-east India got attacked by a gang, possibly backed by politics. A mysterious person named Mahakaal (MK) rescues Leela from her assailants. She is being helped by him for a week or so in the forest. However, when she comes out, the media and mass blame her for involving into some anti-national spy activities. She did her best to explain the aid received by MK, but things didn’t turn out the way she wanted as MK is far from being tangible and accessible. Now the real fun begins and all the unsettled puzzle looks scattered beyond a common vista.

Leela runs away and hopes to find MK for solace. However, when she was under her custody in the forest, they interacted for a while and she got some code words in the form of poems and so on. While on the run, she is also on a hunt to decode those words uttered by MK and wanted to solve the mystery.

The novel does not end at one point, rather more confounding angles add up as it chugs ahead. Reader will be fortunate to meet a prodigy named Bharat; he was also the mentor and cousin brother of Leela. His characterization is totally different and somewhat catalytic to the overall plot of the novel.  His detox-themed content creates buzz for sometime but eventually leads the story to a different moot point. For better understanding, the novel runs up to 400 pages and segmented into four parts.

The second part Prithak Ghati is a terrific part in the novel. This place is special with its innovative sustenance model and it’s discussed over and again in the novel, especially during the end of the novel, where we see war time.

The more you discuss the subplots and sub-themes of the novel, the longer it’s going to linger in your mind. The storyline is filled with substance and for intellectuals it will be soul-appeasing. Though there are many direction boards in the story, ironically after one point of time they all converge to the same point. Getting at one point is the real thrill in the novel. Language usage is great; the only pitfall is the excessive detailing of sweeps and characterization. The novel cannot be pushed through hurriedly, as a reader you need to sink in with the storyline and events creating misty yet riveting circumstances.

From mystery to war to political and everything in between, there is everything in the novel, and for this reason it has to be savoured uncomplainingly. Tilak Dutta as an author shines with this work and many might feel that this novel is a perfect script for any Bollywood or Hollywood movie.