January 05, 2020
The Leap by Nita Bajoria is a beautifully written book with much inclination to science fiction. If you have heard about Elon Musk and his dream of dying at the planet Mars, well then you will have ease to grasp the pure essence of this book first-hand. It’s Elon Musk, the mastermind behind Tesla that has ventured into interplanetary transport system and his belief to colonize Mars. The book is built around life in space, especially at some other planet: like Mars. 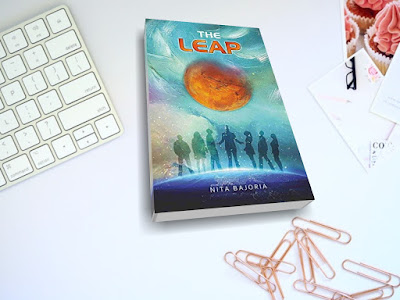 So, what’s in the book? The novel holds stories of many who wish or dream to be on Mars. And for each person, reasons differ entirely. And here lies the beauty of the book. The author has roamed across the globe, delved deep into the cross-cultural backdrops, to bring out alive those stories. As the story begins, we see that the planet earth is suffering from population explosion, all sorts of pollution and what not. The place called earth is becoming a place to leave owing to the brilliance of the human race. Well, then there is a scientist named, kind of protagonist, Dr. Tyorkin and some of his allies. They roll out a project – Red Planet Project – it means entry to Mars. Well, the project was not meant for astronauts, rather they wanted normal and ordinary people to go there and start a life. Is it possible? That’s the rest of the narration.

The route to settlement on Mars is going to be simpler one or there is something that can hinder their plan and aspirations? Also to note that as you read the novel, it comes out that it’s a one-sided project, what will happen there, and will they be able to come back or not? It all remains a mystery until you finish the novel.

Another great aspect of the novel is the life stories of all contestants. When Dr. Tyorkin and his team advertise for the mission, they get huge response from across the world. At this point, the author’s brilliance comes in the arena, Nita was able to portray the messed and screwed up lives of many people with absolute credibility and right set of emotions. Why do so many people applied? And what are their hidden secrets and aspiration that is forcing them to go on a kind of suicide mission? Of course the human psychic is not only befuddling but beyond the vista of common apprehension.

Many stories, all converging to one point, the show is literally brave and amusing. Nita Bajoria must have done great research and imagination to build up such a heavy yet impressive novel.