January 05, 2020
The Abandoned Daughter by Hyma Goparaju is a soul-stirring work of fiction. Set in 19th century, the novel takes us to the roots of the Indian patriarchal society, which seemed brutally ruthless towards a gender called female. 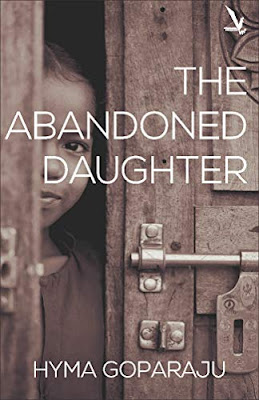 The novel opens up with a powerful scene, where a mother has to resist as well as to embrace the death of her newborn baby. Why? Because the newborn is a girl. Shockingly this is quite common in the village Sarhaipur and nearby. As the story chugs ahead, in the limelight comes Gomti Devi. She is a village landlord with five sons. She is the major head of the mansion where all live. She controls a huge family. She has five daughters-in-law, but surprisingly yet to have a grandchild. Why? So far all her grandchildren born were girls, so she killed them brutally.

At Gomti’s house and in the nearby area, it has become a custom to kill baby girls for various reasons. Once you get into the book, you will get introduced to the lineage of beliefs that has always led to killing of girls and subsequently a formation of patriarchal society in India. Tragedy runs like banter in the backdrop, so much so that after one time, either you feel stoned or give up the belief in humanity.

The entire story gallops around the brutality and cruel politics played by Gomti and her sister Gorma, who lives in Lucknow but often drops in to the village. More than fiction and events, the book is into the detailing of gender discrimination. For a long time, the novel runs on the power of antagonistic figures like Gomti and Gorma. However, in snatches we get to see other events from auxiliary characters like Kulbhusan and Rasik Lal.

Every time a baby is born, clouds of suspense keep readers in the fog. But as soon as the gender is disclosed, the activities begin sounding banal. So in this case, the author should have kept the story a bit short, but still the pace of the novel is commendable. The course of the story changed to some route when Kulbhusan goes to Lucknow and gets married to a clever and rich girl. That was a kind of turning point in the novel. Much later, towards the end, we see the intervention of government to prevent female infanticide. The time is around 1870s, post the mutiny of 1857. The British Raj has started working on the demographics of India for tightening grip over the Indian society. Startlingly, the records show that the population of some areas has almost recorded no female births. The inquiry, along with a few officials, reaches Sarhaipur and the trouble begins for Gomti. Will she be changed for the better or what will be her fate under the new female infanticide act. Those who are familiar with Munshi Premchand’s work will definitely reckon with this novel.

The novel is unique as it talks about female empowerment, and its backdrop, which is historical in nature, is riveting. The clarity in writing is the strong pillar of the novel.