December 22, 2019
The Lost Gold by Kaushik Yegnan is a brilliantly penned down general fiction with sub themes like war days, human aspirations, history, family allegiance and legacy, and a few more. As the one gets into this novella, which claims to be an hour’s reading, cross-cultural backdrop begins amusing. The novella has a timeline that stretches from 1920s to 2008. Such a lengthy time frame, and surprisingly it gets covered in just 51 pages, probably the author knows how to put sweeps and back stories credibly. To be more precise, flashback narrative technique has been used to make the most of it. 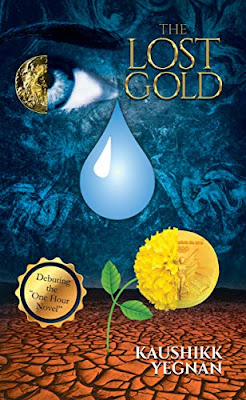 Coming to the story, it first revolves around a family named Kaufmanns, in Germany. Stephan Mathias Kaufmann is a scientist and due to his good work, he is close to Fuhrer Hitler. This is the time when the ground for WW-II was shaping up, especially in Germany. Stephan has only one child Andrei, he is shy and aloof, spends most of his time chasing butterflies in the backyard. His father wants him to follow a path of glorious career through academics, a career like scientific research. However, that didn’t happen. Why? May be because of Jesse Owens and Hitler?

The event of 1936 changed Andrei’s life drastically; he was so much captivated by the long jump sports that gradually his orientation shifted to that game instead of following his father’s commands or academics. That is one aspect of human aspiration, not necessary that getting a fit into the lineage is the best suited one. Here this child silently revolts against his own father to travel on some other path.

The book is short but the intensity of the ambience built around from time 1920s to 1940s is remarkable. Especially in the year of 1940, what led to cancellation of Olympics and how many lives got affected by it? This novella conveys that part magnificently. The author has talked about unspoken anguish and the lost gold medals. These themes have a lot to do with the Olympics events covered in the book, especially the 1940 and 1980 ones. The journey and the allied sports glory from Andrei Kaufmann to Andy Kaufmann was terrific.

The author’s fast-paced narrative brings out the core of human psychic related to life goals and aspirations. Not only this, but the blending of other aspects and themes are also covered nicely, for instance the suppression of Jews, the rising of Hitler in Germany’s household chores, aftermath effects of WW-II and generational suffering about hidden pain and anguish. The best part of the novel is when it revolves around war days, the story of that maid Bretta not only going to make you uncomfortable but also break your heart in the absence of compassion.

It seems that the author must have done tremendous research to pen down a novella almost tangential to the war days in Europe. He succeeded in putting credibility among each character and overall setting. However, on a flip side, the author could have stretched this novella to a size of a full novel, filled with spies and love stories. In the end, it was his choice. Well, still it reads like a good one.