Book Review: A Journey in Search of Happiness by Ramya R. Moorthy

December 10, 2019
A Journey in Search of Happiness by Ramya R. Moorthy is a multi-focused self-help book that aims to inspire millions of people across the world for leading a meaningful life. The USP of the book is that teachings related to leading a meaningful life constantly flow in the backdrop, however, on its façade, we see that it’s wrapped with some fictionalized tale. Unlike the most of the self-help books that keep on bantering with no plot or fixed characters, this book is different. We have gotten to see that the story in the book is roped in with some characters, though from one family only. 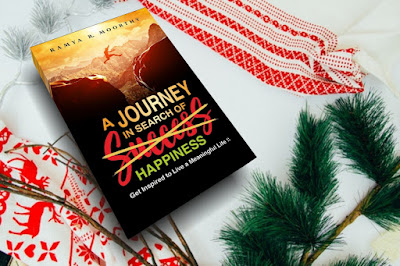 The main character of the book is Shivani. She is a mother of two children, and in her personal life a successful IT entrepreneur. As the story commences, we see that their daughter Anila has been infected with hearing loss accidentally. She is upset. On her twelfth birthday, Shivani and her family go to Phuket for a vacation. Shivani takes up the challenge to inspire her daughter. There in Phuket, the duo of mother and daughter get involved into teachings mainly about five life principles for self-development, which includes the following:
For each principle, there has been given a separate chapter. Also, whatever conversation or exchange of knowledge takes place between them is being recorded in a recorder, which is later listened by Anila’s father.

Other than the story of a family and their vacation, personal stories of Shivani’s struggles, and a few more aspects, and in the core of the book runs these five principles. The author has presented them in a lucid and easy to understandable way. To clarify the doubts, she chose the young girl, who not only had some difficulty in grasping the concepts but also asked relevant questions. The book made perfect logic.

Much focus has been given on ‘Game Changers’. It means the people who become successful and happy in life. They achieve what they think and in return inspire millions of people across the world. In the very first concept ‘Count your Blessings’, we come to know that each individual on the earth has some or other sort of talent. And those who identify that, they become the game changers provided they make use of that with the help of important virtues like self-discipline and self-realization, etc.

To support the concepts, the author has from time to time narrated the references from books, inspiring quotes, life stories of many successful people (businessmen, scientists, sports players, etc.).
Isn’t a dazzling quote related to count your blessings?

“We all need a combination of multiple talents to excel and meet our life’s purpose.”

The book is full of such inspiring quotes, other than exciting references. The core value of the book focuses on chasing happiness over success or any other worldly achievements. The author has been right in saying that many think that success means wealth and fame, with very little to do with the satisfaction or happiness. From the given five concepts, the author tried conveying that do not seek for just success, rather go for happiness, because the later is a kind of complete package.

A lot of information has also given on the concepts related to SELF such as self-discipline, self-belief, self-realization, and so on.

As a matter of fact, the book has too much to offer via these five principles. Well, it would not be possible to give away all pointers in one review, for the best utilization, we would recommend you to pick up the book from Amazon. Since the book is just around 150 pages, so it is easy to finish it one round.

It’s a meaningful book and it seems that the author has put in a lot of effort while deciding the content of the book, the timely insertion of other’s stories is as good as gold.

The focus on women’s roles and responsibilities is another great aspect of the book. The story of Shivani made us learn to be resilient and rise up like a phoenix. Incredibly a helpful book.