December 18, 2019
Feni Daze by Mathew Vincent is an exceptional work of fiction that delves deep into the vagaries of life of the protagonist named Victor Gabriel. As the book opens, we see that Victor stumbles upon her ex girlfriend Ana. And here onwards the saga of his backstories and riveting sweeps begin. The main story line shuttles a lot between the time line of Victor, at times, it runs continuously, and sometimes in snatches. 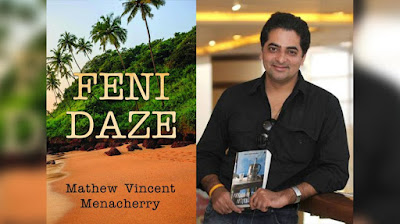 It would be tough to sum up the story with respect to one context, rather we saw that the story is scattered, backstaged against various cities and places, such as Punjab, Bombay, Goa, Bangalore, etc. The most fascinating aspect of the book is that Victor has been portrayed as a solid and adamant kind of person, though by heart he is too soft, and compassion flows like banter in his veins. We are not sure about other aspects of the novel, but one thing is sure that Victor is highly a likeable character. His character has been developed according to the circumstances he underwent.

It will not be wrong to say that the story is based in and around him solely. Victor has had a sad and dull childhood owing to differences in his ancestral roots, but mainly because his father was a heavy drunkard. Anyway, the message is clear, that for underprivileged children the society is not soft-hearted. The author has brilliantly pinpointed the hue and cry of a lower-middle class family, and its effect on children. For instance, when Victor joins the local gang under the charge of Ganesh, a goon; he gets beaten up brutally and after this incident he decides to join the Indian Army. He succeeds in joining the army as an officer. However, owing to his good physique and bold nature, he seems like a misfit there as well.

In the contemporary times, we see that Victor is hanging around with his rich girlfriend Ana, and to his company in Goa, he gets acquainted with two trouble-inviting girls from Britain. Tiny dust-offs while vacationing in Goa builds the overall mood for the story as what could have brewed in his past life. Soon it becomes clear that Victor has affinity for trouble and saving people from their woes.

The most interesting part in the novel is Victor’s posting in Punjab during the insurgency. There, he gets quite close to the family of Manjeet Singh, an ex soldier of the army. He falls in love with Simran, the daughter of Manjeet. However, things didn’t turn out as he could have thought. But for the sake of revenge and humanity, he loses his army job. How and why? That is the interesting part in the novel – this whole part is quite riveting. But the time he gets hold of his life, a lot has been lost, and at one point it simply seems as Victor is lost while understanding and balancing the protocols of the world. Is it possible for him to live his life at his own terms? Fingers crossed!

Throughout the novel, via Victor’s character a sense of radiation keeps buzzing, as he wanted to show the world why things can’t be straight and honest. Why is there so much politicizing of everything? He tries to find out that, but probably gets entwined in the whole process at the stake of his life and freedom.

As the title says Feni Daze, from it Feni is a local liquor available too easily in Goa, it is made of up cashew nut. And Daze means under the influence of it. As in the novel, we see that the character Victor often goes about drinking a gamut of drinks, though the most common one is Feni. A lot of other information has been given in the novel about Goa and its bars and tourism and problems created by the rich local guys. The backdrop information about Bangalore also sounded impeccably credible and most importantly Victor takes us to that time of 1980s and 90s when raw things used to be raw and green as green.

The author must have done a tremendous amount of research to talk about some crucial events timeline and the army operations and other things that happened with Victor. Overall, the story is good; however, in the contemporary timeline or say Goa days it loses its sheen and the author could have provided less time spent in Goa. Otherwise, backstories hold the novel brilliantly. Writing is superb, especially the unheard vocabulary.