November 26, 2019
My Neighbour Osama Bin Laden is a head-turning title. Written by Yslar Tatuky, he claims it to be a first hybrid novel. Backstaged against the charming and the lush verdancy of Okriba, a town in Georgia, Europe; the novel has more to offer than a relative story about the world’s once most demanded terrorist – Osama Bin Laden. 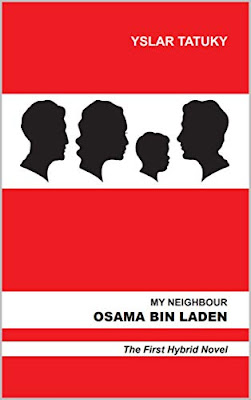 It’s unusual to find four consecutive introductions in a novel. But some or other way, that made sense in developing a sense of love for the novel. Since it’s a hybrid novel, we think it has its own slices to be shared among a host of readers. The novel is full of stories within stories – though it is not a collection of short stories. It commences with introductions – the author tells us what he thought on the day when the world celebrated the news of Osama’s demise. Further, he takes us to the beauty of Svaneti, he experiences a life-changing alpenglow, and then we see his family roots and history, which is as interesting as intriguing. His ancestors hailed from Japan and but landed and settled in an unlikely Georgia. The story of eastern and western slopes’ forest did by his grandfather and much more insights. The introductions were rich in history and other information, well also exposed some reality about the author. We are going to see more as we chug ahead with the novel.

Before we talk more about the novel, let us announce that Okriba is not such a small place that the world keeps it forgotten, rather it is famous for two sunrises in a day, and politically many famous and controversial personalities are kept in this town for security reasons.

According to the author, Osama had been neutralized on 2 May, 2011. He was dead to the world. However, Yslar sees an otherwise version of the news. In a few months time, in his neighbourhood, he sees some unusual activities by some enigmatic men. Later, he comes to know about that a mysterious (also equally a suspect) man named Mustafa is invariably his new neighbour. Yslar is chosen to help Mustafa adapting the life standards of the town, and for that he gets paid by British Intelligence. Why is Mustafa being protected – there could be many reasons. However, strange enough, to Yslar he looks like the deceased Osama Bin Laden. Was it true? May be or maybe not – the real story is inside the book.

With some embarrassment, Yslar takes time to get acquainted with Mustafa. They form a bond gradually. Yslar introduces him to the world of literature and together they get into many lively debates, such as on Lenin, Jews, religious disagreement, about some controversial authors like Salman Rushdie, and so on.

On a façade, the story of Mustafa keeps going. However, in the backdrop like banter, Yslar’s aesthetic tastes, his habit of bonding his characters with movies and literature and art keeps the readers amused and befuddled. His habit of comparing the characters from movie scenes is a good gesture towards describing and visualizing them in sheer delight and truth. On the similar lines, we got to know about him, in his own words:

As for my appearance (and here, I will use the advantage of a hybrid novel), I look very much like Joaquin Phoenix’s character Theodore Twombly from Her. When I watched this movie, I was even surprised, so real the resemblance was, as I wear my moustache exactly in the same way as Theodore Twombly does.

More than a strong affinity for literature, film, and music; he is a sort of a connoisseur. He mixed his taste and preferences, along with a heavy dose of philosophy, in work with a strong fervor, which is evident throughout the book. Remember Yslar did study of philosophy, though he is not a philosopher, but loves being philosophical.

As the story of Mustafa takes charge in snatches, the author brings ahead the topic of love and beast. The kind of thoughts he poured in are indeed thoughtful and worth concerning. The angle of love and beast gets vantage point when Myko turns up. Who is she? Better you read this:

You may have seen Malena by Italian director Giuseppe Tornatore, with Monica Bellucci staring in the title role. Do you remember the final scene when Malena comes from the market dressed in a grey jacket? Do you remember the face she has—the weary face of a woman who is bored and tired to death with her own beauty and men’s attention, a woman who is trying to hide her charm and sensuality. This is what Mayko was, the most beautiful woman with the kindest and most innocent smile.

Events of mystery and suspense build up in and around the story of Mustafa; however, it fluttered and looked always on tenterhooks. Despite all that, it’s a unique and riveting read.