Book Review: A Collection of Interesting Encounters with Cryptids by Mostyn Heilmannovsky

November 17, 2019
Reading a horror genre book is quite common nowadays, but how many times did you ever stumbled upon a book that overwhelmingly grips you with so much thrill that you go amok. Probably, you don’t remember exactly, or very rare as it happens. 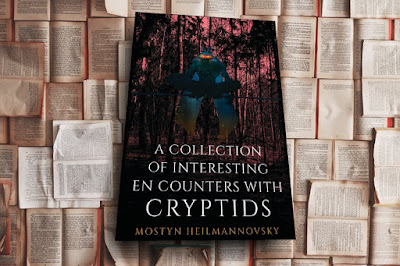 Well, today, on the similar lines, we have a book on the review: a collection of 18 stories. It is A Collection of Interesting Encounters with Cryptids written by Mostyn Heilmannovsky. The book is not only innovative in its semblance, but also gripping with its all stories, providing excellent coverage on Cryptids: a kind of bipedal hairy species found and seen very rarely, like once in a millennium. In fact, science says that nothing like Cryptids exist in the world, however, this brilliantly penned down book by Mostyn says it otherwise.

Mostyn takes us to the dark places and lonely forests where myths rule over the facts about Bigfoot (also called Sasquatch), Dogman, Vampire (in the last story), Troll, Werecats, Yowie, Skinwalker, and a few more. There have been many Hollywood movies on vampires and witches and werewolves. But, movies or literature about Bigfoot and Troll is yet to come. As a matter of fact, these Cryptids are integral to various folklore all across the world.

As in all the stories, the author has mentioned that people never believed these rarely seen cryptids until they came across on their ways or found them around their properties or met while roaming in the lonely forests while wounding up and down the mountain ranges.

Intangibly, the book is segmented into various parts, as per the cryptids. For instance, when the book kicks off, we see stories of (good and bad) Bigfoot of USA and New Zealand, followed by Dogman series – which is really captivating. And the story of that greedy Leprechaun is mind-blowing. Can you imagine an occult species lusting after gold so much that it doesn’t hesitate to kill people for it. Well, in the story, the young man offers it a lot of gold to save many lives and free the house of his friend.

One revelation is clear from the stories based on Bigfoot or Sasquatch that they prefer to live in their undefiled world or region. In the first story that is backdropped against the forests of Oregon, the man who meets the Bigfoot, gets the friendliness of the cryptid. However, the story about Moehau Man (a kind of Bigfoot) of New Zealand clearly depicts that these hairy creatures wanted to keep themselves distanced from human race for as long as possible, that’s why the creature warns the photographer to not to come back.

Well, if you notice, you will find that not all these hairy creatures are friendly to humans, especially Dogman. In the collection, the most suspense-filled and antagonistic stories are about Dogman. Mostyn has covered the stories from Europe and the USA under different circumstances. The story of a boy who loses his uncle while dealing a vile Dogman is intensely coveted and sounds better than some parts of Dracula.

The book is full of interesting encounters about these enigmatic creatures. For people looking for stories and books based on strange yet amusing creatures, this book is to be savoured in their bookshelves. The book is written in simple and lucid way and that makes it worth reading. Yes, the stories depict straightforward encounters, but the suspense and the newness in each story makes the way for all minor pitfalls. One would be able to grasp the stories in its full and core essence. This book is highly recommended as this type of collection does not come so often. Amazing work done by the author.

You may buy the book from Amazon.