October 17, 2019
Voting at Fosterganj is a short story written by Ruskin Bond. Before you get into the story, you must know that Fosterganj, a small dwelling place, is located in the outskirts of Mussoorie, where Ruskin Bond spent quite a time. He has also written a few more stories with Fosterganj as a backdrop. 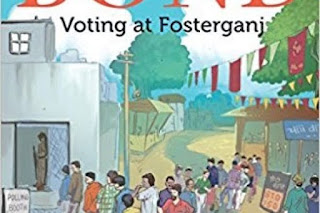 This story is about a day of civic elections i.e. people going to cast their vote for the local candidates. Devilal is the candidate whom the narrator supports and many others. And to win the polls, Devilal has arranged free taxi rides for the people to reach at the voting polls, so that none of his supporting candidates miss the eventful day.

As the time comes, Ruskin gets into the taxi, and when it is passing through the bazaars, he describes the various buildings and factories that once vibrated heritage and hilly culture and the British Raj charm. But today they are in abeyance, unattended. One of the funny incidents is related to a brewery factory, as how it got shut down when one of the soldiers died falling in a gutter.

The story, Voting at Fosterganj, offers a gamut of sweeps that gallop high in the narrator's mind whenever he is out in the streets. Another dazzling aspect of the story is mentioning of Congress party. How their workers tried to lure people for their support.

Interesting to know that when Ruskin gets in for the voting, he finds his name written as Rusking Bound – funny that on voter lists names never get written properly. While going back home in the arranged taxi, in a hushed up conversations, one of the voters named Vinod reveals that he preferred cow symbol over cock. And Devilal's symbol was cock. Well, Ruskin kept the secret and did not create any hue and cry in the taxi which was full of Devilal's supporters.

Ruskin Bond succeeded in creating an eventful and dramatic day of the election voting. If you have ever lived in a town, you will be able to relate the events. A lot goes under the layer of carousal created by the supporters of their candidate. Short and crisp, the story is a perfect abode to the local culture and backdrops found in the Indian small towns. Amazing read!