October 05, 2019
Rough Way to the Highway is a well-written adventurous, suspense, and part spiritual novel. This is my first novel where I got the opportunity to be with a truck driver throughout the novel. Yes, this is a story of Mack – a trucker, who has recently got a new Peterbilt truck, and on his way to Chicago to deliver a meat supply. The route to his destination is long and that is something not new to him. He was into truck trade earlier also, which he learnt from his uncle. 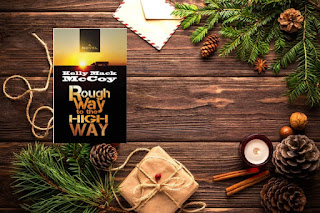 Well, this time the story is different, he is out on the road after a long time to cut off from the griefs he encountered while working as a pastor. When I read the blurb – it was much focused on a mysterious hitchhiker Mack picks up around the Jordon Prison Unit. I was expecting it as something a kind of dust-off between the two. Probably, the hitchhiker may abduct his truck or try killing him for some treasure. Alas, I was wrong. The novel is way beyond the reader’s anticipation. In fact, at one time, the novel becomes so compulsive and riveting that it itself interprets the next move. That’s the whole point, and the novel eventually becomes unputdownable.

Since it’s totally a Christian novel, in the backdrop runs the pious nature of Mack and the teachings of the Bible he learnt in his life. I loved the way Mack keeps intact his faith in God. One good instance is when bullets are fired at him by a passing car, everything blacks out. To rescue comes the faith and spirituality. As he broods about his past life, we see more instances of godly help done to him. As a reader, I always thought that truck drivers are scruffy and rude, however, this story changed my perception.

People living outside the USA will find it informative – they will get to know about life in the trucks, what kind of truck hauls prevail there, and all possible dangers that lurk on the road. As I got more into the novel, this simple-looking novel, inch by inch, begins adding elements of political conspiracy and terror plots. And also about smuggling - what was that smuggling? Will his truck be used for something new kind of smuggling or to plot something against the white hats? Is America sandwiched between the black hats and white hats? Too many connections and conspiracies all first get into one – made sense to Mack who otherwise was so simple and straightforward.

Other than the current obstacles that keep gathering around Mack, and funnily that mysterious hitchhiker remained unscathed. A lot of doubt is built around that Ricky or Rocky hitchhiker…believe me. After the gunfire attack on Mack, the narrative of the novel changes drastically. And the terror plot that one of the known figures of Mack was planning since a long was about to materialize right under his nose, and his truck being used for that. But how…that’s the best part of the story. A very delicate, yet intricately carved out novel.

I never felt that it’s the debut novel of Kelly Mack McCoy. Such was the engagement I had with the novel. Also, the writing style, up and down narration through dialogues was at par. And by keeping very fewer characters involved, he has delivered a story that is not only clean but equally riveting at every page. With this novel, McCoy joins the elite club of writers who has a lot to tell from their personal life’s experiences and wisdom.