October 23, 2019
Now and then, Indian mythological fictions are flocking the contemporary Indian literature arena, and these books are being noticed by huge masses, as they are rooted to our ethos and values, especially related to religions. 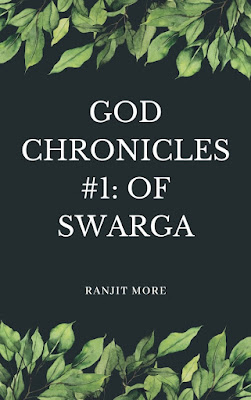 So, today we have this amazing mythological fantasy fiction, God Chronicles #1: Of Swarga written by Ranjit More. It’s a first of its kind story featuring Swarga (heaven) as a backdrop. This short and crisp novella is about the world of devatas. King Indra rules Swarga, and he has set an invisible line as a barrier that no one dares to cross, and those who do, they are executed.

The story kicks off with a young man who tried to get the water of Ganga falling from the sky to cure the leprosy of his ailing father (though he is a devata, but got cursed). And for that he had to cross that invisible line. But well before his plan could materialize, he was killed by the king.

Is the king Indra a righteous devata? Does he think of the well-beings of all residents of Swarga? You can find out if you continue with the book.

Well, next, this news saddens Kratu, one of the top-rated ministers in the court of King Indra. On the other hand, below Swarga is the planet earth where humans live and they are being fed to worship the King Indra above all and it is being done by one of his ministers named Sudyumn. When the followers of King Indra increased on the earth, this causes an event of celebration in Swarga. Kratu is reluctant to this fact. It becomes evident that Sudyumn is all set for an appraisal by displacing Kratu.
However, soon when Sudyumn is appointed as the supreme minister in the court, Kratu revolts, and here onwards his days not only changed but seemed petered out.

The story becomes quite interesting after this point. For being a protester, Kratu is being imprisoned and death seems the only punishment for him. Well, with some twists and turns, Kratu manages to come out of that hell and starts his journey for the betterment of people. There is a lot of drama and action is involved, which totally seems credible and is of potential to make this book unputdownable.
What will Kratu achieve, is rest of the story and how? Without giving away much, we can express that this novella is way different than other mythological fiction written so far from the perspective of Ramayana and Mahabharata. Since the book is short, one can finish reading it in one go. At times, the author has given too much emphasis on the subjective details of ambience and characters, but the overall charm in the novel covers up well for all specks of pitfalls.

Ranjit as an author, for this mythological fiction genre, is a promising talent. And it seems he possesses good knowledge about Hindu mythology and religions and gods. We are sure, he will make a resilient comeback with another dashing novel. So far, this one was too good, and can be read by all.