Book Review: Chats with God in Underwear by Eduardo Chapunoff

October 27, 2019
Chats with God in Underwear by Eduardo Chapunoff is a work of fiction, possibly with a slightly head-turning title. Well, inside the story, there is a lot of humour that will make you forget about the title’s contumely. 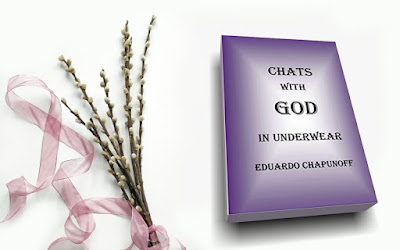 The story kicks off with an extremely violent storm hitting the Atlantic Ocean. The magnitude of the storm is such that even giant ships and tankers cannot escape its wrath, but there is one man who is sailing smoothly and calmly. There has to be something special about him. Who is he? Any guesses? He is God. When he arrives alone at the beach in the aftermath of the havoc-causing oceanic storm, he meets a kind man named John, who lives nearby the beach. Both are strangers to each other. John finds solace and incredibility in so called God’s presence. Thus, he invites him to his sprawling house on the beach. Well, God’s earthly name is Rogelio. John gives him pajamas and underwear as a change of cloth. That’s how the title is set.

When Rogelio poses himself as a God, John refuses to believe. So, would anyone! Next, Rogelio has to perform some hedonistic miracles to prove himself. After that John believes him and soon Rogelio proposes to have a meeting with the religious persons representing different religions existing on the earth. John helps him arranging the representatives for him. The list includes catholic priest, an evangelist, a rabbi, a Buddhist, an Islamic scholar, and an agnostic. From there on, the novel becomes more conversant. Rogelio takes the session, one on one, with all the invited members. Some of the sessions were long, while some were of average length. But they were fruitful.

Rogelio asks too many questions to these delegates and through all these he tries to find the solutions for humans. As on the earth, humans are becoming, day-by-day, pathetic and everywhere crime, poverty, massacre, terrorism is rampant. Why? If people love their god or they worship him, then why so commotion?

The objective of the novel is to send peace vibes across the people of all communities. It takes an effort via a humorous way. Since the novel is written in a dialogue form – it is interesting to read and understand. At times, it sounds high on theology, but at the same time it has been fictionalized in the sanest way, with good efforts of wit and humour. Those who want to understand humanity, can definitely pick up this book for a trial.

Other than conversation and dialogues with the delegates of the different religions, we see that John is an eminent psychologist, rich, but he has his own set of problems. His youngest son is suffering from incurable leukemia, and his second son is almost a wastrel, above all his current wife is nymphomaniac: all the time obsessed with sex. Will God be able to solve his life’s problem?

Also, there are some extraordinary tasks performed by Rogelio which marks him someone as very special and above the ordinary. Well, that part of the novel is interesting – moves like a fantasy movie. The message in the book is that God himself wants to understand the issues created by humans on the earth. Will it be possible to humans live peacefully forever on the earth? Probably this is the question that the author tried to seek.

In the end, God returns the way he came i.e. boat and the sea. However, these couple of lines from the last chapter may be able to strike a chord in your heart, try grabbing what lies underneath them: ‘They looked at each other and saw mutual sadness. John embraced Him and began to cry’.

People might think that with a hilarious and controversial title, the author tried to be smart, however, a close look reveals the good intentions of the author and his faith in God. Written in simple language, this is indeed a great book to be learnt something about this life and why we all should need a bigger faith in God.