August 29, 2019
The Missing Husband seems like an apt title for a crime thriller, and when I first took up this book I thought that it is going to be another 'The Silkworm' show, where I had met my famous fictional detective spy, Cormoran Strike. Well, lucky this time, got to meet someone as Byzantine as Strike. 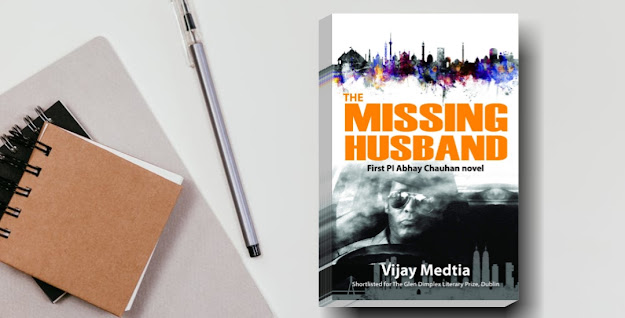 Well, this novel by Vijay has an Indian detective (Personal investigator) Abhay Chauhan. He sounds everything but grave. Well before getting into detective line, he was in the Mumbai police force, but left it, as he believed that he was a wrong fit there. He deemed them as donkeys.

Like many international crime thriller bestsellers, this novel's hero, too, is full of some basic aspects needed to sound an interesting spy. For all those reasons, he is handsome, well-built, had dull childhood, orphaned, unmarried, and rude. I am sure you will love him for his rudeness.

The story kicks off with a not-so-big issue. A big business family in Bombay: Fernandez’s. The time is 1995, the time when Bombay was newly renamed as Mumbai. The head of the family is Gorge Fernandez, rich like anything. The only trouble is that someone has taken some objectionable pictures of his daughter Anita, and threating to leak the pictures in the media if the cash demand didn’t meet well on time.

Since Fernandez is a busy man, he appoints PI Abhay for getting the pictures back, without causing any social damage to the family.

However, deep inside the story, Fernandez’s knotty family story portrays an otherwise tale of factions. The matter looks secretly untoward for the head Fernandez, if not for the entire family. According to George Fernandez, his daughter Anita and one son are wastrel. They contribute nothing to the business, except troubles. His son is out and away in Europe. Anita Fernandez is an incorrigible reveler of parties and bragging culture, along with drugs. She was married off to Prem Nath, an army officer. Things were not great between them. They were on the verge of a settled divorce. Well before that could happen, Prem Nath walked into the sea – that’s what people think.

So, it comes out as the story chugs out that Prem Nath is missing, but this revelation does not take away anything from the story. The Missing Husband title refers to Prem Nath. But why did he go missing or what happened to him? This needs to be found out? Surprisingly, No one is bothered about his disappearance. Not even Anita, and nothing can be said about Maya Fernandez – young ravishing wife of Mr. Fernandez.

The hired detective, Abhay, is told repeatedly to keep his chase till the collection of the nasty photographs through various characters. His rudeness and affinity for trouble compels him to a deeper and darker chase game, which leads to unexpected twists and turns.

The kind of villains and their motives get revealed gradually and unexpectedly. And I was speechless for the brilliance of the author. I think this makes any crime or suspense thriller riveting, as a reader you discover the people involved, get the clues, know the main villains, but always something is missing from the chain. The book is interesting right from the start.

The ability to create recurring crime scenes and impromptu twists and turns substantially put this novel into an aura of thrill. To love these kinds of novels, you need to become a fan of the detective cast, and exactly the same happened with me. I often fall in love with detectives more than the story itself. Probably, this is the reason I always wait for the Cormoran Strike novels every month.

Certainly, the novel nudges readers to interpret things at their own risk. The author succeeded in pulling a string of interest throughout the novel. A spy with a car – is like on the run life always. Any given day, this novel can be turned into a successful motion picture.

Generally, with India as the main backdrop, crime suspense novels dip in the narrative, however, this seems like have utilized the scenic intriguing charm of Mumbai. Amazing story, I was so stitched to the story that I completed reading it in just one sitting. My biggest bet on the novel was that even for a moment I didn't feel like being dragged. Hopefully awaiting the sequel.