February 08, 2019
The Meeting Pool also known as My Boyhood Pool is a short story by Ruskin Bond about boyhood days. The story starts with Rusty, the narrator, strolling on a road, it is about to rain, and then suddenly he hears the sound of water running, like in a stream, behind a dark line of forest. He goes there and finds a stream coming down from the mountains and lying over a shingle. He takes it as an easy-to-hang-out pool. So much excited, he goes running to break the news to his close friends – Anil and Kamal. 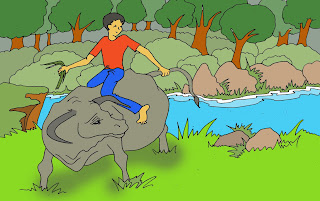 They all go to school and often seek places to sit alone and do a lot of fun. They don’t prefer to be in crowded bazaars. For them that pool is a place of ballast – they name it as Rusty’s Pool. They often meet and have fun in swimming. Other than that they try hard to catch fish but to no avail. One day Anil explodes the one rocky side with the gunpowder, as a result he gets trapped in the explosion; thank god he is saved by Rusty and Kamal. One day they plan to build a dam on one side to deepen the pool but due to torrential rain it gets washed away, so do their clothes. After that they sneak secretly at their homes, since they were totally naked.

Other than basic fun, wrestling with one another was their prime pass-time activity. They also rode buffaloes until thrown away in the muddy water. They would come their so often after the school. At times, they would come there at night and remain involved with the serenity of the nature. They discovered that pool so that they could remain away from the hustle-bustle of the city and be good friend, always lost in mischief. Only Ruskin has that charm to remind you of your childhood. This story is so relatable and nostalgic that you will be forced to look back at your childhood days.