Author Highlight: Sarath Babu Discusses his New Book ‘One Plot Many Stories’ and Stories from his Life

November 23, 2018
We are back with another author interview. Today, with us, we have Sarath Babu – the author of ‘One Plot Many Stories’. In this interview, Sarath Babu talks about his writing aspirations, the route to getting his book published, and his inclination towards short stories. Stay on...while we chat with him. 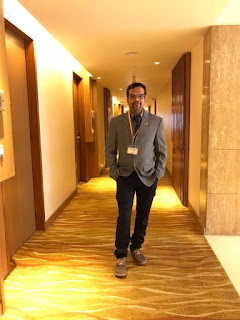 What motivates you to write?

Passion! I have been penning stories since my childhood. I still have a story which is dear to my heart waiting to be published.

What were your feelings after publishing this book?

It feels really great. I feel that I have achieved something.

What are some of your favourite novels and authors?

There are many and hence it is difficult to name them but when it comes to authors, I can which includes Ruskin Bond, Jeffrey Archer, Sidney Sheldon, Agatha Christie, James Patterson, Ashwin Sanghi, Amish Tripathi, Christopher Doyle to name a few.

Do you think writing a book from the comfort of bedroom is possible?

Yes but I haven’t tried that yet.

Where do you write from? Do you go to some specific place, like beachside or into the hills?

I usually pen it sitting on my dining table. You read it right. It helps me in keeping my laptop conveniently. Prior to this, I use to write it in my cubicle when I was working with TCS (in the night, after my work gets over).

What inspired you to write this book? Any tales to tell…

Nothing as such. I wanted to be different among others and hence this book.

What was your biggest learning experience throughout the writing process?

That you need to keep writing. The art of writing is an evolving process and it gets better only if you are in the business.

Looking back, what did you do right that helped you break in as a writer?

I never left the process of creative writing and my passion to read and write since my childhood has seen me as to where I am now.

Any best piece of writing advice that you would like to share with new or struggling writers?

Yes. Do not let your passion die. Right or wrong, do start writing. You can always get it edited through a professional. Do not wait for conventional publishers. You have the option of Self-Publishing these days. Go for it.

Something personal about you people may be surprised to know?

Any future books that you would like to discuss now?

Yes. Version 2 of One Plot Many Stories is in the making. I am hoping to release it sometime next year.