Book Review: Love among the Bookshelves by Ruskin Bond

July 16, 2018
If you ever wanted to know why we read books, then go nowhere and stick to this book. Let us take it a bit forward: people read books, especially literature and comics and biographies, for some or another reason. Only a handful of people get into books for the sake of pleasure. In case you are an ardent Ruskin Bond fan, by reading this book, you will get to know why he loved reading books and how those books influenced his life on the whole. 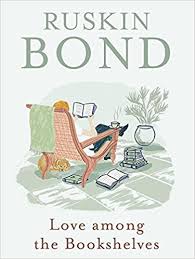 Every writer has to be a reader first and Ruskin was no exception to this proposition. Ruskin became a compulsive reader since an early age because he was born into that era when sources of distraction and entertainment were limited unlike today where we can sit before the TV set all day or browse the Internet untiringly all day and night.

To read and understand this book, first off you must know Ruskin’s history. Ruskin was born in 1933 in Kasuali of the British India. Since then he never came down to the plains – even today he stays in the hills. Once he said that mountains are kind to writers. His father was in the service of RAF but he died when Ruskin was eight or ten. His mother remarried an Indian Punjabi and after that his life was never the same. Loss of father wilted the spirit of his life, and as an escape from the harsh realities of life, he got into books. Books provided him solace and company above anything else. So, wherever he went, he searched for books and upon finding read them.

Now coming to the book, Love among the Bookshelves is a collection of stories of Ruskin Bond’s favourite authors. The book opens up with the chapter ‘That week in the Jungle’ – this chapter sets the overall tone of the book. In the winter of 1944, Ruskin is forced to go on an expedition in the jungles of the Himalayan foothills with his mother, stepfather, and a bunch of weird shikaris. Ruskin has a soft heart, thus he loathes hunters and killing of animals. Instead of going along with shikaris, he prefers to stay back at the rest house with the khansama (the cook). While exploring the house, he stumbles upon a walled cupboard full of books. Till now he has no proper access to books. In fact, he has no idea of selecting books as per interest and taste. Well, here he sees three selves full of books – he goes through them and finally two books capture his attention. Let’s see them one by one. The first one is Love among the Chickens by P.G. Wodehouse. It offers a humorous account of chicken farming. The main character of the book, Stanley F. Ukridge, is one of the most popular characters of Wodehouse. Ruskin finishes the book in a day’s time and becomes an ardent fan of Wodehouse.

The second book is about ghost stories: M.R. James’s Ghost Stories of an Antiquary. The stories were about occult and supernatural things. Especially, this book spawned interest for horror and suspense and thrillers into Ruskin’s life. He got so much into these kinds of stories that over the years he got indulged in the works of Algernon Blackwood, Edgar Allan Poe, Sheridan Le Fanu, E.F. Benson and others who specialized in the genre – and then he went on to write ghost stories.

Ruskin was so much awed by the humorous beauty of the book Love among the Chickens that he dedicated the second chapter of this book about Wodehouse and Love among the Chickens. Here Ruskin takes time to inform us about the major points of the book and other famous stories written by Wodehouse. Other than plot summary, Ruskin tells us about the writing struggle and style of the writer. Before the end of the chapter, Ruskin points out that Wodehouse was into comedy kind of literature, that he never mentioned war or socialism in his work. For realism, Ruskin had to turn to Graham Greene and Somerset Maugham. For romance, he preferred R.L. Stevenson and Daphne du Maurier; and for mystery Agatha Christie, Rex Stout, and dozens of clever crime writers.

But whenever he wanted an escape from the routine of boarding-school life, or the conflicts at home, he turned to Wodehouse. People keen to be acquainted with Wodehouse and his book Love among the Chickens, can definitely read through the next chapter.

The second segment of the book is about holiday reading. In short, during school holidays Ruskin was a reader of comic books first and then he gradually got into classics.

During the prep school and senior school, Ruskin mostly read comics of superheroes like Bulletman, The Phantom, Captain Marvel, Superman and so on. When he came out, he got into classics, and under this category his favourite writer was H.E. Bates. According to Ruskin, Bates sensitivity to beauty and to characters was astonishing. Though Bates wrote quite a number of novels, Ruskin liked his short stories. To put forward the brilliance of H. E. Bates, Ruskin has included the story ‘Great Uncle Crow’ by Bates.

By now you must have made out that the book is segmented into parts. First you will see Ruskin’s struggle as a reader, then follows the details of his favourite authors with a sample chapter or so. In a sense, he is introducing his reading treasure to his fans and readers. As you read ahead, you will get to know about his struggle in the island Jersey. Also, David Copperfield by Charles Dickens have had so much influence on him that he moved to London to seek a fortune for himself. He was trying to be a David Copperfield – well anything is possible when you are young.

Ruskin fans have all possible chances to explore the best of his favourites. Such books are rare to find and if you find then don’t forget to treasure them.

This non-fiction work of Ruskin isn’t that long but the variations in it may make you feel as you are going through a literary journey.


Enjoyed reading this story! Here is your chance to read 30 best stories by Ruskin Bond - https://goo.gl/uBeMY6