Author Highlight: Sharon Gupta Discusses her Book ‘The Shakespeare Murders’ and Stories from her Life

March 28, 2018
It’s time for another author interview. Today, with us, we have Sharon Gupta, who currently lives in Chandigarh, India. Sharon is a Civil Servant in the Ministry of Communications. She’s from Delhi, but she has lived all over the country. She has a multicultural background and she’s travelled extensively abroad and in India. Besides writing, Sharon loves music and plays the guitar. She speaks English, Hindi and French. She believes in living life to the lees! 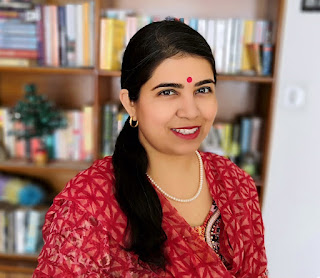 What is the genre of your book? (For example, fiction, poetry, fantasy, romance…)

Please describe what the book is about in short.

William Shakespeare worked for a company of players (as actors were called in those times) called The Chamberlain’s Men. They performed his plays at The Globe Theatre in Southwark, London. In my novel, the players are under attack as someone’s knocking them off one by one. The Lord Chamberlain, who’s also head of the Queen’s Household, takes matters into his hand and hires a bold, young knight called Geoffrey Drake, to try and solve the murders. What ensues is a funfest of action, humour, jousting, murders and finally, the killer is unmasked! Do visit my website: www.sharongupta.com for more details about the novel and my other writings.

Where do you write from? Do you go to some specific country, state or city to write?

No, I don’t go anywhere. It’s just not possible, given the nature of my work and the fact that I have responsibilities towards my family, as well. I’ve developed the technique of retreating into a shell and writing just about anywhere! It can be early morning or late at night; or during a lean period in office, or, if I’m typing my second or third draft, then even in the car while travelling to and from work.

What was the time frame for writing this book?

Researching The Shakespeare Murders took me a whole year because I had to go back to all the plays I’d read during my graduation and post grad. (I have a Master’s Degree in English Literature from Delhi University). Fortunately, I love reading Shakespeare so I wasn’t really out of touch. But it still took time. Then, plenty of research followed: the works of literary critics…almost unending! Writing the story took another year. It’s the longest I’ve spent on a novel. Usually, I take about a year to complete a novel, start to finish.

Briefly, what led up to this book?

As I said, I love reading the Bard and I was always curious about what it would’ve been like to actually perform on stage in those days. I write thrillers, so the two things came together: Shakespeare’s stage and a thriller.

What was your biggest learning experience throughout the publishing process?

My biggest learning experience was the hard work that goes into editing and re-editing a novel! It’s unglamorous, hard work. A lonely place. Fortunately, I have wonderful agents of The Red Ink Literary Agency in Delhi, to help me.

Looking back, what did you do right that helped you break in?

Two things, I guess: One, I wrote a fast-paced novel with a complicated but interesting plot. Everyone who’s given me feedback after reading The Shakespeare Murders, has said they couldn’t guess who the killer was! That’s so encouraging because it’s the crux of a thriller. Second, I managed to get an agent, or rather, an agency. That’s hard, I know, but it’s nearly impossible to find a traditional, royalty-paying publisher unless you go through an agent.

On that note, what would you have done differently if you could do it again?

Nothing, really. Just write a little faster…perhaps. Although I am a fast writer. The thing is, it’s been a long struggle for me. I published my first novel, a historical thriller called Riders on the Storm, way back in October 2000. It was self-published and it didn’t do anything for my career as a writer. Over the years my short stories and articles were published in newspapers and magazines but that still didn’t help. It’s only when Tara India Research Press took up The Shakespeare Murders, that I’ve got recognition as a writer.

Any best piece of writing advice from your side that we haven’t discussed?

Don’t know it I should be advising anybody because everyone’s journey is different. Just one thing: write well with complete conviction. No point cutting corners because it will show.

Something personal about you people may be surprised to know?

If not a writer, I wanted to be a singer! ABBA was my favourite group while growing up. I adored their lead singer, Agnetha. But that’s quite a hard profession to break into, especially when you’re a Government Servant. It’s not easy to get leave and travel around.

Lots! My agents have three completed manuscripts and we’re starting the edits on one of them very soon. God willing, my next novel might be out later this year! It will be a contemporary thriller set in India. I’ve also written a few short stories for Juggernaut. One of them, Contract Kavita, is available now. My other two short thrillers are also available for download: Jaipur Estate on www.freeditorial.com and Gods on Speed, a thriller set in the Trojan War, on www.wattpad.com. Besides these, I’ve completed the first draft of a new novel. So, it’s a busy time.