January 14, 2018
The book deals with the challenges that immigrants face in assimilating into a post-colonial Britain, readers must be curious to see how relevant the plot is today in this post-Brexit period. 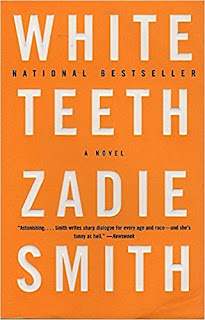 Set in multi-cultural London, the book’s layered plot is sprawling, both geographically and historically. Archie Jones, the indecisive forty-seven years old English man, wants to take his own life after divorce from his Italian wife Ophelia but is saved by Mo Hussein-Ishmael, a halal butcher. A little later, he meets and marries a much younger Clara Bowden, a Jamaican, who is trying to escape from the clutches of her religiously fanatical mother Hortense Bowden. In the meantime, Samad Iqbal, Archie’s friend from Bangladesh, whom he met in a British tank during WWII somewhere in Europe, immigrates to London with his wife Alsana and takes up residence close to Archie. Samad is paralyzed in one hand and works as a waiter in an Indian restaurant. Samad and Alsana have twins - Millat and Magid, and the Jones’, a daughter named Irie. The children become friends and share the experience of growing up as second-generation immigrants in a multi-cultural London.

Samad decides to send Magid, the elder of the twins by two minutes, to Bangladesh in order to become a good Muslim while Millat takes to drugs and women before succumbing to Islamic fundamentalism. Irie Jones, low on self-esteem and struggling with her sexuality, falls in love with Millat, the religious zealot. The story gets more complex when the white middle class Chalden family, who behave like colonisers, is introduced into the melting pot. The mother Joyce Chalfen, a horticulturist, believes that she can help the damaged Millat. Her zeal to reform Millat comes at a price as she ends up ignoring her own family. Her son Joshua gets alienated and ends up becoming a part of a PETA like group championing the cause of animals. In the end, all three families are united by the project of the geneticist Marcus Chalfen in a plot that has themes like history, fate, religion, and identity intriguingly intertwined.

Unquestionably, the book’s major theme revolves around raptures and ruptures experienced by immigrants from former British colonies now living in a multi-cultural London. Samad, Alsana, and Clara are first-generation immigrants who feel culturally bereaved due to the loss of the familiar, including language, attitudes, values, social structures and support networks.

They continue to live in the past, suffer feelings of guilt over abandoning their culture, and are stricken by anxieties that mar their ability to get on with their lives. Even the second-generation characters of Magid, Millat, and Irie do not feel connected to Britain despite being born there and struggle in their individual ways to fit in. While Irie alters her Afro hair style to conform to the British idea of beauty, Millat becomes addicted to drugs and women to assert his identity.

The book portrays multi-cultural London as a heartless place that makes it difficult for immigrants to intermingle with the natives. Au contraire, in a beautiful passage, Zadie Smith gives a glimpse of how immigrants have become a part of the local world:

“This has been the century of strangers, brown, yellow and white. This has been the century of the great immigrant experience. It is only this late in the day that you can walk into a playground and find Isaac Leung by the fish pond, Danny Rahman in the football cage, Quang O’Rourke bouncing a basketball and Irie jones humming a tune. Children with first and last names on a direct collision course.”

The book’s canvas is wide and the tale boisterous. The flamboyant albeit flawed characters have historical connections to former British colonies – Jamaica and India. For good measure, India’s first war of Independence of 1857 is also thrown in along with Mangal Pandey who, like in the war, has a prominent role to play in the narrative. The satirization of the English middle-class Chalfen family stands out as cutting too close to the bone. The other side stories pertaining to Jehovah’s Witnesses, a non-orthodox Christian sect of which Hortense Bowden is a member, and an amorphous animal rights group that Joshua joins to rebel against his father, are hilarious to say the least.

Zadie Smith’s writing is impactful and energetic. She is a raconteur par excellence who, with a dexterous touch, makes her riffs, stories, and characters move effortlessly from warfront drama to experimental eugenics, from fanatic religiosity to cultural archetypes, and from suppressed sexuality to colonial peccadillos.