November 23, 2017
The Bone Clocks by David Mitchell is segmented into six equally important sections. Also, the storyline has been narrated by five different, yet intriguing, protagonists over a period that spans over six decades. Such long timeline is one of the remarkable things about this book i.e. from an era of 1980s to an apocalyptic future in 2043. Although, there is a different protagonist and a different point of view for each section, except for the first and the last, there is one main character who undoubtedly connects them all from time to time: it is Holly Sykes. 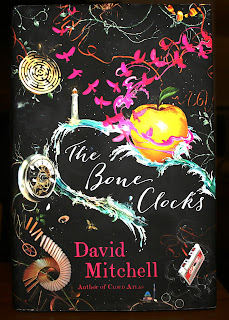 In 1984, Holly Sykes is a runaway teenager in suburban London and she used to hear voices in her head as a child, which she referred as “the radio people”. Holly’s narration is in the first person, this section tells about her family, her clumsy but immensely talented younger brother Jacko who disappears mysteriously, and the shadowy Miss Constantin who comforts her during her nightly visits as a spirit. When Holly is on the run she meets a mysterious woman, Esther Little, who knows her name and seeks refuge in her body. This throws hints of paranormal elements involved in the story of Holly.

The next section is narrated by Hugo Lamb, an amoral Cambridge student in 1991. Hugo steals, deceives, and seduces his way through this section before meeting and falling in love with Holly at a Swiss ski resort. The supernatural elements of the story keep cracking up regularly to keep the readers baffled.

The narrator of the third section is Ed Brubeck, in 2004. He is Holly’s partner, father of their daughter Aoife, and a war journalist. At a time of a family wedding, he is craving to inform Holly about his decision to go back to Baghdad to cover the war. During the wedding, Ed Brubeck experiences the unique, mystic side of Holly in a bizarre incident when Aoife goes missing for a while, but an unconscious Holly somehow guides Ed to locate her.

The fourth section takes place in 2015 and involves Crispin Hershey, a writer who once basked in the glory of good days. He meets and befriends Holly Sykes - now a successful memoirist of her paranormal experiences. Once again, Holly shows a glimpse of her psychic abilities by cautioning him of an impending event that turns out to be exactly as predicted by her.

Up to this point, David Mitchell drives the plot with his characteristic panache and capability, where things and events happen in a real world. But, he also keeps the readers on the edge by providing enticing glimpses of something uncanny, inexplicable events taking place beneath the surface – something that comes to the front in the fifth section.

The fifth section is set in 2025, from there on the narration slips into the realm of fantasy and speculative fiction. This section is narrated by Marinus, an atemporal - a reincarnated soul, an immortal who had cured Holly of the voices in her head during her childhood. There are two types of immortals in the book – Horologists and Anchorites. Horologists are the good atemporals who get reincarnated involuntarily whereas the Anchorites are the bad atemporals who feed on mortals - the bone clocks - and snatch their bodies to immortalize themselves. Horologists and Anchorites are engaged in a do-or-die battle to finish one another. Holly Sykes gets entwined into this battle and helps other Horologists to finish off the Anchorites.

David Mitchell comes back to the real world in the last section that is set in a post-apocalyptic, dystopian, around 2043. Because of climate change, economic strife, and political vendetta, most of the world regions and Europe, has turned into a crazy unruly border. The period is marked by depleting resources, plundering mobs, and declining prospects of survival. Now Holly Sykes as a seventy-five-year old woman, with a burgeoning cancer, struggling to raise Aoife’s daughter and an adopted immigrant child who washed up on the beach with diabetes. David Mitchell’s vision of this rapidly crumpling world is highly plausible, and readers read it with sheer anxiety.


David Mitchell explores number of themes in the book but the prominent one is the question of immortality. In 2014, The Bone Clocks was named one of the top ten fiction books of the year by several magazines.