September 30, 2017
Cross Country Snow by Ernest Hemingway is a short story featured in Our Time collection. It is about friendship, jovial days and finally accepting the burdens of life. It is rather a contrasting story of two friends who wish to linger in Switzerland for maximum time to do skiing but some duties and obligations pull them back and part them. 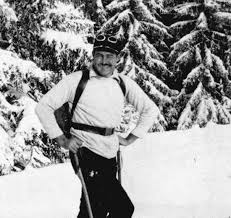 Nick and George are in Switzerland for some time and they are enjoying their time skiing down the hill. Nick is going uphill in a funicular and sees George skiing up and down like a tide of a sea. When Nick begins skiing, after covering some distance he tumbles down on a soft snow mound like a shot rabbit. Soon, George comes to lift him and they both go over the fence and start walking on a narrow road in the forest. They reach a bar where the waitress is singing a German Opera song; next she serves them Sion wine.

They both notice the swelling belly of the woman. She is pregnant but signs of being married aren’t there. Thus, Nick says that it is a custom here that a woman doesn’t go for marriage until she is knocked down. Apart from gossiping about women and frivolities, the pregnancy of the woman reminds Nick that his wife Helen is pregnant too and they both need to go back home that is in the United States. On the other hand, George has to resume his studies hence he will be going back home too.


They both discuss the possibilities of skiing together in the USA but feel that is not possible because of shallow geography. They leave the bar and move down skiing till home, if they cannot have skiing fun forever. It is a beautifully story written with a message that the best friends are destined to part away, no matter what they do. The urge to enjoy life and running away from responsibilities is something like two sides of the coin and it seems unavoidable.