June 11, 2017
The word ‘Zahir’ has been derived from Arabic, meaning obvious, an obsession that one cannot hide despite wearing all forms of masks. What’s important in one’s life is evident on his or her face and eyes, even in the actions. In the novel ‘The Zahir’, Paulo Coelho has expressed a writer’s life and of course what is the most prime thing of his life, other than fame and money. 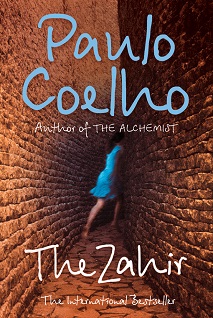 The novel was, first, penned down in his native language Portuguese. Later as the book got exposed to glittering highlights it was translated into many other languages, including English. Though it is banned in Iran, it is available in many other countries.

For the backdrop matter, the story has to feature Paris and the beautiful topography of Kazakhstan. The protagonist of the book is a nameless, famous writer. He lives in Paris with his wife, Esther, who is not only extraordinarily beautiful but also a war correspondent. She loves to be courageous while covering stories from battlefields or war-torn regions. And she has immense passion for her work profile. Outwardly, their lives and marriage is fine, and good going. One day she disappears, leaving no trace or note of concern.

Her sudden disappearance upsets the narrator’s life. He is unable to surmise what could be the plausible reason behind her departure. Or has she abandoned the marriage and eloped with some other man. He assumes number of events, and also looks inside himself for any fault. Her absence makes him restless. And one day he happens to chance upon Mikhail, a close friend of Esther. Though Mikhail is reckoned suffering from a mental disorder, still the narrator takes his help in order to trace her lost wife. Mikhail guides him for commencing his search in Kazakhstan – where possibly his wife could be. Again, like many other novels of Coelho, a journey begins, this time to understand marriage system. The book is a good take on marriage understanding cum philosophy, discussing many aspects of marriage life and its allied events. For this reason, this book sounds imperative for married people. As the narrator puts marriage between two people is like a railway track – they accompany each other but never overlap.

The writer laced with fame and wealth perhaps never attempts to care or think about the aspirations of his wife. This was the reason behind her sudden disappearance; that one the writer realizes later and to fill the void in his life with her love, he ventures to bring her back in his life, in which he succeeds.

The book is high on spirituality, and there is nothing for adventure or mystery sort of thing. The English version is clear and easy to understand.