May 05, 2017
Greg Mortenson hails from an altruistic, mediocre family. He is a trauma nurse in a hospital in California. In his past life, when his parents were posted in Tanzania, Africa, he remembers how his father was busy building a hospital and his mother a school. His parents always endeavoured to better others lives, especially underprivileged people. He had the same altruistic streak but opportunities eluded him. 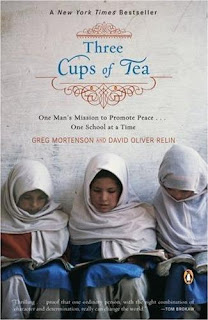 The previous year his younger sister Christa dies, she was mentally and physically challenged. To pay her tribute, Mortenson takes up climbing K2 with a few mountaineers. Due to some adverse situations Greg goes astray and remains lost in the mountainous region for some days before discovering a small village, Korphe, in Pakistan. There he is nursed back to basic health. A village without a school is an uncommon sight for an American. He finds that the village is devoid of a school, where students trying to learn without a teacher.

Haji Ali, the village head of Korphe, becomes a good friend of Greg and teaches him some local customs and dressing sense of Balti people. Greg promises them to build a school in the village, and for that he needs funds. He returns to the USA. Knowing little about the fund rising, he writes countless letters to people and trusts but receives little amount from one response. When a friend of him writes about his work and ambition in a mountaineering journal, he receives good amount from Jean Hoerni, a wealthy man who also happens to be a climber.
Mortenson happily returns to Pakistan, there he befriends a local guide and with his help they both buy the material needed for building school. However when he reaches the village, an irony awaits him. The villagers inform him that the village can be connected to the neighbouring villages only and if there is a bridge built over a deep river gorge. Lack of funds stops him for the time being. He returns to the USA, there he loses his job and girlfriend. Learning his plight, Jean Hoerni steps in again and gives him the money needed to build that bridge.

After completing the bridge he feels little bit succeeded. Back in America, he is invited to have a dinner with Sir Edmund Hillary. Jean Hoerni and his colleague offer him a salary while he continues to build a school in Korphe. There he also meets Tara Bishop, the daughter of a famous photographer and climber. Soon they marry and Mortenson flies back to Pakistan to construct the school. He successfully builds the school and begins to find a new location to build another school. He is of the opinion that lack of education is the prime reason behind terrorism which prevails in the backward areas of Pakistan and Afghanistan. If education is made available to all, possibly the hatred and terrorism on this earth will fade away like a black night as and when the day comes up with the bright sun from the eastern sky.


In the hunt of a new location when he goes to Waziristan, he is kidnapped by a militant group and kept imprisoned for eight days. Later he has been released. Mortenson could not find out why he was kidnapped and later released. He builds many schools in the remote parts of Pakistan. His friend Jean Hoerni, before his death, donates the CAI one million USD and appoints Mortenson its new director. Other than building schools, he commences medical services and helps refugees. Due to conservative Muslim clerics, he faces hardships and wrath of the fatwas but every time he is saved by some moderate clerics.