‘Binya Passes By’ is a captivating short story by Ruskin Bond. The writer has kept it within himself whether it is a love or ghost story? 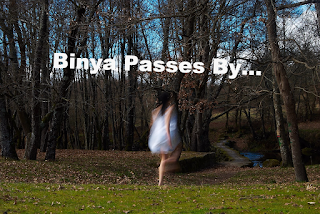 The narrator, a struggling writer, lives in the beautiful hills of Garhwal. He resides in an OK-kind of cottage, good for average living. The narrator being a writer is accustomed to long walks, as that’s quite a common way of passing time in the mountains, especially in the Himalayan region.

One day when he is walking down a narrow path where pine and other trees flanked on both sides, he stops to listen to a singing voice. The narrator instantly falls in love with the voice and imagines the singer would be as beautiful as her voice. The beauty and depth of the voice leaves him with inquisitiveness; he comes across the same voice at other instances, at times around his cottage too, but he fails to track the singer.

One day when the narrator reaches at Pari Tibba (Fairy Hill - famous for ghosts and spirits) along the stream that comes from high in the mountains, he takes notice of the same voice thus he follows it until the discovery. There he finds a hilly girl of less than twenty, her face stained with bilberries juice. For a moment the narrator frustrates to find the girl opposite to his imago.

Despite the differences, they become friends and chat about wanderings and ghosts in the hills but surprisingly the girl refuses all rumours related to spirits and ghosts. The girl reveals her name as Binya and age sixteen. The narrator says he has no name and for that she makes fun of him by saying he looks a hundred years old. They meet at other occasions too. The narrator finds that the girl is chirpy and adventurous as she walks up and down the hilly slopes effortlessly while steering her two cows that are always out for grazing. The girl remains out door in search of fresh grass, firewood, and fruits.

They drench in the rain, climb the tree, eat bilberries together, and talk about various things related to age, life and family background. The narrator is attracted to her physical appearance and kisses her on a few instances. Despite the age difference the love story begins gaining momentum but suddenly the girl disappears. This causes a great pang of frustration and solitude to him, he takes the long walks to find her at all possible places but to no avail. He assumes various theories but finds no relief. At last he gives up hope and engages himself into writing novels.

The narrator’s cottage once belonged to an old lady. She lived there for thirty years before her death. Her soul lingers around the cottage and it often gets reflected in the long dressing mirror. She often smiles at him and the narrator thinks that everything is fine hence she doesn’t trouble him. One late night when the narrator is drowned in the memories of Binya, he switches the lights on only to find Binya smiling at him from the long dressing mirror.