April 10, 2017
Valhalla Rising by Clive Cussler is a typical suspense thriller, featuring Dirk Pitt. The novel goes credibly smooth like a Hollywood movie, with subplots, the huge greed of a hidden villain, and his dangerous team, and much more. The story is about investigating the sinking of a luxury cruise ship called Emerald Dolphin, set on its maiden voyage. The ship has the best in class amenities and is fitted with revolutionary engines that run on seawater and fuel. But sooner the shine of the luxury, revolutionary cruise ship begins turning into the gloom, it catches fire. 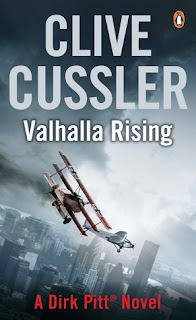 Ironically, all technology that is needed to curb the fire seems to be being disabled deliberately. But who did that remains blurred? Too many cooks spoil the broth is the case with Emerald Dolphin’s crew members, who helter-skelter vainly and ineptly and totally forget to send Mayday signals.

Dirk Pitt, a project director on board Numa ship, Deep Encounter, catches the fire sight on Emerald Dolphin accidentally. He saw smoke rising against the blue horizon. He, with his team, races ahead and also informs other ships for the rescue operation. They manage to save almost all – around two thousand people were on board. Emerald Dolphin sinks deep down in the ocean.

However some villains are too on board who kill Dr. Elmore Egan, the man behind this ship’s revolutionary engines. But Dirk Pitt saves his daughter Kelly, who later joins him for research and other catastrophic events.

On a discovery mission, when Pitt and two other members go down in a mini submersible, they discover the reason behind Emerald Dolphin’s sinking. Before the trio can surface up, their mother ship, Deep Encounter, is already been hijacked by the pirates – a team sent by Vipers. Then they float for a few days in the ocean before being saved by a private yacht, which is handled by a lone coot.

After that Dirk Pitt and his best partner Al Giordino save Deep Encounter and the crew from the clutches of pirates and also goes on to save one submarine luxury cruise and in the end averts a disaster by sinking Mongol Invader, a cargo ship laden with LPG gas, which was heading at full speed to strike at the bridge stood on the Hudson River.

Behind all ship disasters stand one man: Curtis Zale – the owner of Cerberus Corporation – America’s largest oil company. At any cost, he didn’t want Dr. Egan’s engines run on water and fuel. If the formula succeeded, then oil companies will shut down. And for his personal motifs, Zale can go to any extent, so he tried sinking three ships which could have resulted in mass killing but he was least affected. He also tried to have Dirk Pitt killed with the help of his team, Vipers.


The novel shuttles between first sinking the ships and then saving the people with all heroic efforts. No particular theme runs strongly in the novel. Moreover, the writer puts the story off the track many a time by describing too much about people’s appearance, clothing, manners, etc., which at times sounds unnecessary for a book full of conspiracies and ship-sinking events.

There is a lot of tech information about the ship and marine biosphere, which, in snatches, makes the read a little bit boring. Also the linking of ancient tribe Valhalla did not make much sense. The novel felt being fragmented, the author could have simplified it, but he didn't. Maybe he thinks that his reader base is familiar with his tech jargons. Anyway, an average read.