April 12, 2017
Dan Cameron was one of the toughest law officers around the borders of Montana and Wyoming. He was so ruthless in his job that to an extent he was popular as ‘Dan the killer’ and people feared his presence. However when tragedy thumps him - his bride dies in his arms – shot by one of his enemies on the very first hour of their marriage. He vows to renounce the arms. 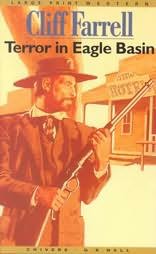 Soon he hears about his friend Ed Vickers’ murder and arrives at Rimrock to help Lennie and Tansie, the brother and the wife of Ed Vickers respectively. There he also meets a chirpy and bold woman, Jennifer Spring, who is going to settle down in Eagle Basin, where terrorizing of locals is continued by some unknown gang members.

The prime suspect of the murder is Bart Webb but Dan senses something else and takes up travelling to Basin to discover more as well to hand out justice to the brother and the wife of late Ed Vickers. During their stay at Rimrock and travelling to Eagle Basin they resist some missed attacks on themselves.

After catching a few clues, Dan discovers that the killing of people in Basin is motivated by Willis Mason and his assistant Max Largo, who have discovered a huge treasure in a well of Bart Webb’s field. Thus they want the people to flee Eagle Basin so that they can manage and own the treasure leisurely.

To get rid of Dan, the villains kidnap Jennifer Spring, who is falsely married to Dan, and the wife of Bart Webb and take them to a rotten dungeon. Dan and Bart team up and fight hard to release their women, and kill the vile men.
Often Cliff Farrell covers the plight of early settlers when modernism was slow in coming and there was no technology or proper transport. Nevertheless, this book is action packed.