April 26, 2017
Poos Ki Raat is a very famous short story by legendary Hindi writer Munshi Premchand. This story is widely circulated in the schools of India for various mediums, in English it is often taught as Wintry Night or January Night. Halku is a poor farmer who owes money to his landlord, Sahna. Whatever crop Halku toils, most of the share goes to his landlord as the interest rate on the borrowed money is so high that Halku has a feeling that he will not be able to pay off the debt all his life. Sahna is waiting outside Halku’s home, demanding money. Somehow Halku has managed to save three rupees to buy a new blanket, since he needs a heavy blanket while guarding his field at night. Munni, his wife, is reluctant to give that hard-saved money to the landlord but Halku insists that cold nights are better than his jibes. He gives away the money to Sahna. 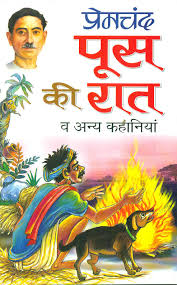 In the dark and extremely cold night Halku reaches his field. He settles down in a cot under a thatch canopy made of bagasse. Under the cot is lying his dog, Jabra, which is whining since the cold waves of the night are difficult to resist.

While smoking cheroot Halku is cursing his fate over land lordship and finding it difficult to survive through the cold of the night. He hides his face between his limbs but to no avail, he keeps on tossing and turning but finds no warmth. Forgetting all the difference between a man and an animal, he calls the dog on his cot and embraces him. Halku feels little cozy but soon the dog senses something awry and barks while running into the field. Halku looks at the starry sky but to his dismay finds Saptarishi (Big Dipper) constellation twinkling vividly, the morning is far.

Not so far from his field, lies a mango orchard. Halku prepares a broom of lentil crop and rakes up a heap of fallen dead leaves. Upon setting the bonfire he forces the dog to leap over the fire, which he does twice. With the heat coming as a relief Halku feels elated and thinks that he has beaten the gloomy dampness of the night. Halku is so much delighted that a sense of lethargy overwhelms him, and he forgets to take care of the field. Soon blue bulls attack his farm, the dog barks and runs into the field. Instead of taking up the responsibility of shooing away animals, Halku tumbles into a dead sleep on the snug and dry soil around the bonfire. When the morning arrives, bright sun rays are stamping their presence all around the village. Halku is awakened by his wife, who is lamenting him for his negligence in the duty. Long before Halku can realize, the field has been destroyed by blue bulls. Munni is sad but Halku is happy because he gets rid of guarding the field in wintry nights. He will pay off the debt by working as a labour instead of a farm owner.