April 13, 2017
The Lost Child is a riveting short story by Mulk Raj Anand. A little boy and his parents are on their way to a village fair on account of a spring fair. The alley leading to the fair is alive with a vivid combination of colours and people. 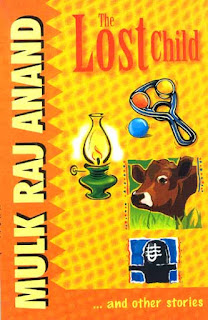 The boy is happy and chirpy and walking between the big limbs of his father, between the long strides. As he can see there are toys in the shops lined along the way. He is captivated by the colourful toys of different sizes and shapes but in his observation he lags behind. So he runs ahead to be with his parents. When he expresses the desire to own one of the toys hanging from the shops, a cold stare from his father breaks his heart.

Suddenly, to break his attention from the lingering toys, his mother tenderly shifts his attention to the swaying muster field, which seems to be full of golden ripples – moving to and fro. The boy enters the field and begins chasing butterflies, black bees and dragon flies. But soon he is called back.

Once they approach the village hosting the huge fair, the boy is fazed by the intensity of the fair. He sees people thronging in from all the possible pathways. There he finds the world full of interesting and mind-diverting commodities and shops like sweetmeat seller, snake charmer, flower garland hawker, balloon vendor, etc. all await his discovery. He wished to posses everything, each item from each shop but deep down in his heart he is aware of his parents’ refusal. When he sees people whirl pooling and shrieking in a roundabout, he urges to sit in that. However when he turns to see his parents, he finds them nowhere in the sight. All of sudden the boy forgetting all the wonders of the world begins sobbing and screaming for his parents: I want my mother, I want my father!

Upon finding himself alone and bereft of parents, he runs here and there with no respite in sobbing. His turban comes off and clothes become filthy with sweat and mud. He tries to find them in the people who are busy laughing, jesting and moving all around. In search, he enters a temple through the gaps of people’s legs. There is so much commotion and milling around that he was about to being trampled by thousands of feet when a good man from the crowd lifts him up and asks him about his parents but the child only cries asking for his mother and father.

To sooth the moods of the weeping child the kind man takes him to every shop and stall where the boy previously went and craved for them but this time he refuses everything and asks only for his parents.


A child’s most sought-after prize is his parents, which he realizes after losing them in the milling crowd. In this story the child and his parents are nameless; in fact, the writer has named no one. Despite this, the story never goes dull at any moment, that’s the true beauty of storytelling.


For CBSE class 9 syllabus, read all stories summary from your Moments textbook.