Book Review: Dust on the Mountain by Ruskin Bond

April 18, 2017
Dust on the Mountain by Ruskin Bond subtly highlights the grim issues of deforestation on the mountains in the wake of modernisation. 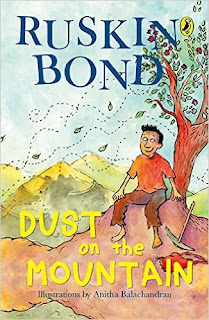 Bisnu lives with his younger sister and mother in a very small village of Tehri Garhwal. Since the mountains have received scanty rainfall and bare minimum snowfall last year, as a result orchards of fruits and farming in the field have yielded minimum output. The streams and rivers that descend from the peaks are shallow and dry, so the villagers are facing the problems of inadequate ration and fail to obtain any income from the farming-related chores.

To save his family from starvation, Bisnu goes to Mussoorie much opposite to his family’s wish. Since summer is a happy time in Mussoorie and the place is full of tourists from the plain areas. After many attempts he finds a job in a cinema hall as a tea seller during the interval. There he meets two other boys Chittru and Bali. They all become friends and work as per the orders. However Chittru and Bisnu become close friends as they sleep in a corridor at night and brave the chill night breeze that comes from the mountains.

Bisnu is satisfied with his work and life. However as September approaches, the cinema shuts down for winter. Bali moves to Delhi for work while Chittru and Bisnu go to a mine site in the hope of getting work. There the contractor keeps Chittru for the work but rejects Bisnu on account of underage.

Understanding the plight of his fate, Pritam, a Sikh truck owner, takes Bisnu as a cleaner on his truck. Bisnu receives good salary from him and they become good friends. They work for the mine site where deforestation and blasting of mountains are common for generating lime powder. However Bisnu feels sickening at the sight of mountains losing their green shine and becoming dusty like plain areas.


One day in an attempt to save a mule being crushed under the truck, the truck topples and goes rolling down in a valley until it is stopped by a strong tree. Bisnu and other laborers manage to escape the accident but Pritam is brutally wounded. In the hospital Bisnu says had they were not stopped by that tree, they would have died by falling in the valley. Pritam decides to live with his sons and Bisnu goes back to his village to take care of his family and the nature around him.