Book Review: The Dogs of War by Frederick Forsyth

April 17, 2017
The Dogs of War by Frederick Forsyth is a novel based on coup d’état and the lives of mercenaries. The setting in the novel is of Zangaro, a small fictional African country on the western coast. A British Mining Company, Manson, owned by James Manson has founded positive results for platinum in the Crystal Mountains of Zangaro. They want to own it but the president Kimba, an oppressive figure, is friends with Soviet Union. 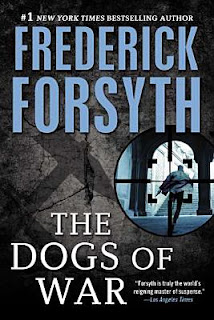 Thus James Manson with his financial expert Martin Thorpe and security chief Endean devises a plan to throw off the current president of Zangaro and to keep a puppet president from their side. This move will help them to devour the platinum mine at very less cost.

Based on a freelancer writer’s recommendation, Endean approaches Shannon, an experienced mercenary who has spent most of his life fighting in the African countries. First, Shannon goes to Zangaro as a tourist and collects the information about military and arms present in the country. The military and ammunition is concentrated in the palace of Kimba, which is located at the capital city Clarence, which is also a port city. So it becomes clear that they have to attack at the palace. Shannon signs the deal in one lakh UK pounds.

On the other hand, Soviet Union gets the hunch about the platinum in the Crystal Mountains, so it gives KGB security to Kimba. Endean doesn’t reveal about KGB security to Shannon. Shannon recalls four of his expert mercenaries for the project and sends each one in a different country to assemble the cargo ship, ammunition and other equipment necessary for the attack. In London, he happens to meet Julie Manson, daughter of James. For some time they bed each other and during this time Julie reveals the true intentions of his father behind the project.

Before sailing on for Zangaro, Shannon collects six more mercenaries and Dr. Okoye. The attack goes as per the plan; some of his mercenaries get killed. After killing Kimba, Shannon also shoots down the man who had come with Endean to become a puppet president. Shannon appoints Dr. Okoye as the head of the country. Later Shannon sends the money to the families of mercenaries died in the project and he shoots himself.