April 11, 2017
Cry Wolf is a war fiction novel by Wilbur Smith. In 1930's when colonialism and fascism was blending and there ran a competition across European countries for gaining maximum colonies out of Africa, that time, in the same pursuit Italy, under the command of Mussolini, sends fully armed army to invade on Ethiopia. On the other hand, the tribal people of Ethiopia are defenceless and listless. They have only spears and stones to withstand the powerful Italian army led by the General Count Aldo Belli. 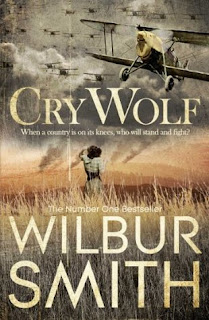 Gareth Swales, a ravishing personality from Britain, strikes a deal with the Ethiopian prince for supplying old but functional cars fitted with ammunition to fight against the merciless Italians. To get derelict cars in motion and have them fitted with equipment like turret he approaches Jake Barton, an American from Texas State who was in the US military but has turned into a motor mechanic of great knowledge.

After repairing and fine tuning the motor cars and with ammunition trunks for the prince, they start their journey through the secret ways. They also have the company of Vicky Chamber, a beautiful journalist from America, who is in Africa to cover up the cause and suffering of Ethiopian people. After much suffering they make their way into Ethiopia, where they are supposed to return after handing the cars and ammunition. However the prince tricked them to stay there so that his soldiers – all illiterate tribe – can get arms training.


Both white men vie for the journalist but she too is confused about whom to choose. Inevitably, the trio gets involved in the war proceedings but defeating the fully loaded army isn’t only difficult but also next to impossible. As the situation worsens, they arrange a small plane to get lifted away from the battlefield; however, in the end Gareth Swales makes a sacrifice to save them both but in the efforts loses his own life.