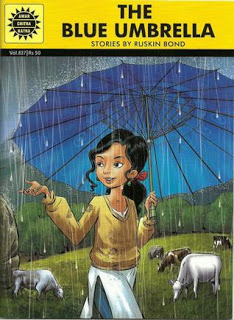 The blue umbrella is so much beautiful that soon it becomes a topic of conversation for villagers and children adore her umbrella so much that every time they feel like to touch or hold it. Binya is on seventh heaven and rarely closes it because she believes it looks charming when it is opened.

Ram Bharosa runs a small shop where he sells food items, grocery, and soft drinks without a refrigerator. He is so much envied by the umbrella that he decides to own it at any condition. So, he extends a proposal for buying the umbrella from Binya. But she refuses the offer. The refusal turns him off. Very soon, he hires a boy from the neighboring village to work at his shop. The boy being loyal to him steals the umbrella from Binya when she is out in the jungle collecting porcupines quills.

Ironically, the boy is caught by Bijju. When the boy reveals Ram Bharosa’s name behind the stealing, the villagers ostracize him and also stop visiting his shop. As a result, Ram Bharosa suffers a loss and his livelihood comes on the verge of end.

Binya feels sad about Ram Bharosa’s situation and she reproaches herself for his suffering. Next, she donates her umbrella to Ram Bharosa. In return, Ram gifts her pendant with a bear’s claw in it, which is considered even luckier than of leopard’s.


The Blue Umbrella by Ruskin Bond is a children’s book. The story is short and simple but elegantly touches the core aspect of humanity - kindness. Through Binya Ruskin instills a sense of kindness among children. It is an amazing read for all.


Looking for The Blue Umbrella by Ruskin Bond PDF, kindly send the request through Contact Us page.