August 14, 2016
Seva Sadan was the first novel of Munshi Premchand, it was first written in Urdu as Baazare-e-Husn (the market of beauty). But, its Hindi version got published first. The story starts with a very common social scene: an honest police officer finds himself unable to marry off his elder daughter, Suman, to a good family because of hefty dowry demands and his financial limitations. So, he tries corruptive ways to obtain enough money so as to play his responsibilities towards his two daughters, instead he lands up behind the bars. 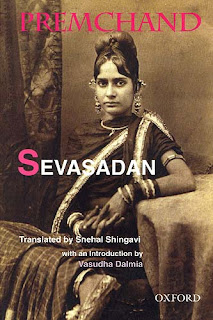 After a series of misfortunes, his elder daughter – Suman - finally gets married to a poor man (that’s done by his uncle). Suman is not accustomed to live in abject poverty; and also her husband is not a nice man as he doubts on her character. Amid shaky understanding, the marriage looks a bleak bond between them. And then one day he throws her out of the home. For some days, she manages to survive on roads and here and there, in Vanaras. Seeing her lonely status, a head lady takes her into her home and then slyly forces Suman to pursue a living in prostitution.

Since Suman takes up prostitution as a means of living, as an upshot her younger sister faces stern discrimination by her husband and other people. The society turns against both the women, and a time comes when Suman’s younger sister is being divorced. At the same time British Government allows local people to run municipalities in some cities. As a result, the new municipality team orders to shift the red light area out of the city, another worry for Suman and people engaged into flesh trade.

Because of the social stigma, Suman leaves the brothel and first tries to work as a teacher along with her younger sister in an orphanage, but it doesn’t work out well for both women. Due to the grim face and the exploitative nature of the society her tale of suffering continues, and she finds herself in a world which seems to offer no place and solace for miserable women.