In Tudor England Lord Cornwell Thomas is dedicated to finish the corrupt monasteries. He sends Matthew Shardlake for an investigation in the Scarnsea monastery in Sussex, of South Coast England. Matthew’s predecessor, Robert Singleton, has been murdered in the same monastery.


Shardlake’s assistant Mark Poer, a young man for penchant for females, falls in love with a girl called Alice, who helps monks in the infirmary. On his way, Matthew discovers that monks have been involved into selling lands and sexual misconducts. This evidence comes into the picture when the sword (by which Robert was killed) and a young girl’s corpse was found in the marsh in the back of the monastery. The dead girl was accused of running away by stealing gold chalices. But in real she was killed by a monk in a lust for sexual pursuit. 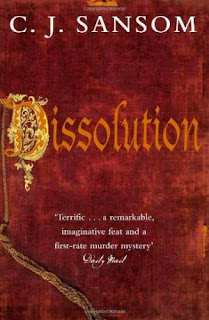 Monks’ lives around monasteries have been involved in all aspects that were either forbidden or illegal, such as - sexual misconduct, embezzlement, treason – monks and abbots are involved into corrupt things and each with different reasons. No one comes close to provide hint of Singleton’s murder puzzle.

The methods of investigation were logical and based on the use of knowledge, unlike forensic reports in modern crime thrillers. Purely a historical mystery novel – description of tidbits of that era guarantees that Sansom is a good historian - as he holds a PHD in History.

Matthew is a flawed human being, unlike other crime novels where inspectors or investigators are far superior to criminals and almost brimming with perfection. Despite a flaw in his physique, he solves every challenge with a veritable ken.

Despite all efforts of investigation, Shardlake discovers that monks didn’t kill the commissioner but the girl Alice, who runs away with Shardlake’s assistant Mark Poer. The killing was based on personal revenge, had nothing much to do with monks’ secrecy.