Book Review: Across the Black Waters by Mulk Raj Anand

June 27, 2016
A troop of Indian sepoys is sent to France to fight against Germans in WWI. In this military fiction Indian sepoys, part of the British army, are being prepared to participate in all wars that England will represent. As per religious beliefs crossing oceans is forbidden. Going by this relic, some soldiers are confused and angry while many are relishing as their dream to visit ‘Villayat’, means foreign land, has come true. 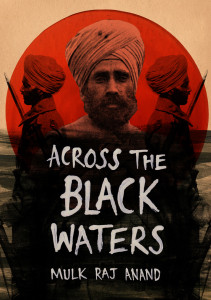 As they advance gradually for the front – they come across to many new and thrilling experiences in France. Foremost in the list is that they are able to enjoy bits of life abroad and native people and French officers aren’t treating them like poor or wretched soldiers, the way they are treated back in their country. Interestingly, except Subh a junior officer and also a son of an officer, no one knows that they are prepared to jump in the battlefield to die first hand.

Lal Singh also called ‘Lalu’ by his senior soldiers is the major moving character in the novel. He constantly compares his life in France from India. One day Subh and his boys are tricked by an Indian Sikh who takes them to a brothel to get them French sluts, however upon reaching they find themselves miserable as they are told to pay more than double than what was asked.

Their street parades through the French towns and villages earn them a good reputation among masses and the troop feel encouraged to pay the salt of the Sarkar. However life, for them, begins changing when their term starts at the battle. Kripu Singh, a close ally of Lalu, harassed by British Sarkar’s ulterior motives commits suicide one night. Furthermore, insufficient ammunition and cold life in trenches drain out all their spirits for life. Thinking of their obligations to Sarkar, they risk everything: life, religious ethos, family back in their country and see their comrades die every day. Despite all, the brutality of the English Sarkar to test out Indian sepoys under poor conditions against the mighty Germans never sees a dip. Military stupidity causes lives of many sepoys and poor Lalu is taken as POW and his miseries never see an end.

Mr. Anand brings into light how the miseries of battle are beyond the comprehension of newly recruited young sepoys. Ironically this war fiction seems so real even without a network of spies. Above all, its unexpected and tragic end makes it a heartfelt read.