July 06, 2015
In Johannesburg, Kitchenerville Fields is a dirty place yet full of prospects of gold. Here, a packet of some wealthy men, truly obsessed with business, aim to influence the market and political landscape and for that they can accommodate to any scope. For them their real pride is profit making business, above anything else. 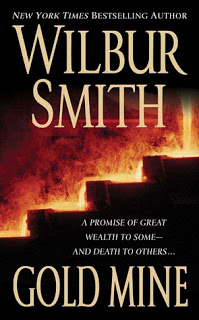 Rod Ironsides is promoted as the general manager of the Sonder Ditch, the largest famous gold mine in Kitchenerville Fields, but in return he is asked to stick to blind obedience of his boss, Manfred Steyner. So far life has been tough for Rod, apparently after a pathetic divorce, nevertheless he has penchant for bar clubs and one-night stands. Yes, but the offer of Sonder Ditch is a lifetime opportunity for him.

On the other hand, a behind-the-scene conspiracy is laid out to immolate the lives of thousands of miners. The killing of thousands of miners would pave way for Menfred’s personal profits. Manfred Steyner is mentally ill, thus, orders Rod and his men to dig deeper in the rock formation. The dig deep will certainly flood the mine and can kill thousands of miners but for Steyner lives of miners do not matter as long as his gains are associated with the mining disaster. Following the disaster, production will be stopped for some time, and prices will rise in the crises of high demand but low supply. Parallel to this all, Menfred’s wife - Terry and Rod are seen dating each other. When it is discovered by Menfred things only get worse from here onward for Rod Ironsides.

To avert the destruction of the mine and to salvage his career, Rod goes inside the depths of the water-logged mine along with the big-hearted Big King, a fabulous African tribal guy. Rod was prepared for the disaster but in the process to save others his closest ally, Big King, sacrifices his life.


Gold Mine explores the grim political situation of the African industrial mines involved into fortune making at the cost of miners' lives. Wilbur Smith has, like an expert, detailed the works of mines and miners, section wise. The book is ingrained with betrayal, greed, lust and love to match the powerful plot and setting. The only missing point is the absence of the African wildlife and the wilderness that comes naturally with it. It’s another bone-chilling classic from Wilbur’s club. Unlike his other novels, Gold Mine is a short read.