May 28, 2015
Early One Morning by Robert Ryan is based on a true story. The timeline of the story goes back to the French Resistance, with the Second World War on. It is a wartime story. William Grover-Williams is a rich Englishman who sets himself free from the clutches of his parents and is next seen as chauffeuring William Orpen, a famous portrait artist. Here, he likes and falls for Eve Aubicq – the charming but little immature mistress of William Orpen. 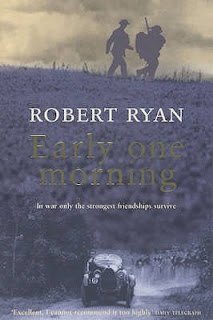 Being a motor racer, William Grover-Williams gets the acquaintanceship of Eve Aubicq and a story of clandestine romance gears up. Robert Benoist, who hails from France, is a competitive rival to William Grover in the European race circuits and also has crush on Eve Aubicq. But still, they both share a sense of admiration for each other and subtly reckon each other in the band of friendship.

When Paris unwittingly falls in the grip of Germans, William Grover-Williams joins Special Operations Executive to work as an undercover agent in the French resistance. Upon reaching Paris, he asks Robert Benoist to join him in the services; their main task is to snitch on Nazis, and they with great bravery sabotage various set-ups of Nazis. However as the story moves forth, they are taken prisoners by Nazis and subsequently tortured to death.


The book is worth reading as it invariably throws light on friendship, love, betrayal and hope. It has a tragic end, as not all war stories are happily settled in the end. The writer has effectively used flashback technique to make things look clear and going, including their deaths. It is an extraordinary story of sacrifice of sporting people who while fighting against the devilish Nazism go through the test of time to leave a legacy of their friendship in the face of adversity.