Book Review: Star of the Sea by Joseph O’Connor

April 14, 2015
Star of the Sea is a ship set for New York from the ruined Ireland. The narration goes beyond the ship and sea tides to unveil life episodes of victims boarded on that ship. Amidst many is a killer, ravenous for retribution to bring some equality and justice to the past life. As the journey charges ahead, long and harsh in biting cold, many passengers of her are battered and die during the journey, some lose themselves while the ship waits at the outer of the harbor. 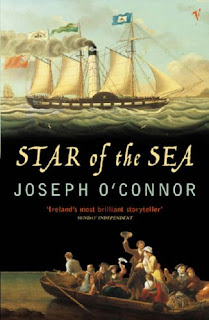 Star of the Sea by Joseph O’Connor is a book rare to find on the Irish Starvation. A magnetic tale unfolds tragedy and mercy and love and redemption with utmost appeal of humanity. The effects of colonization on Irish land by British during the Victorian era are the staple that holds the plot extraordinarily.

The novel gives details of ‘The Great Starvation’ in Ireland in 1847. As going by the facts, during the Irish Famine millions died and many travelled to America to find new life and food. A tragic part of the history has been brilliantly covered up in this novel.


The superior usage of language defines the length of the novel meticulously. And later on, for reading hours and days, one would find clues about that characters are finely placed and thus interrelated. The book features some great and interesting characters and goes in a polyphonic way. A preferred read for those interested in the Irish history, or rather black humanity.